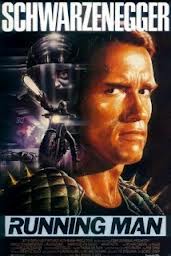 In another post apocalyptic, Big Brother infused world, the huddled masses are faced with unfathomable harsh conditions, with the evil powers that be attempting to assuage the rebelliously inclined with brightly coloured, grandiose, pomp filled over the top game shows.

Ladies and gents… Battle Royale… I mean The Hunger Games…

… I mean The Running Man.

The short version has a bunch of cartoonish bounty hunters stalking criminal prey in an uninhibited urban area as a studio audience and home viewers watch on in raptures.

Actually that’s the long version too.

But this film is more than that. Not much more mind you. It is a film that shows the unbelievable star power that Arnold Schwarzenegger had in his heyday, as without him there is no way anyone mentions this a quarter century later. And it’s not like The Running Man is much good either, with sloppy action, a dodgy plot and a collection of the worst one liners in history, it pales in comparison with most of Arnie’s classics and wouldn’t crack his Top 10.

His Ben Richards is ironically asked to run through the motions, as a series of ridiculous and sadly dated ‘stalkers’ (including a hockey playing sumo and a electric fatman) are dispatched one by one by Ben and his two time hostage – and TV station employee – Amber, a woman possibly cast as she has the only accent harder to understand than Arnie’s.

Horribly dated (apparently they have computers in the future!), with R Rated violence that seems oh so tame in these days of Saw and Human Centipedes, The Running Man was done before and has been done since. It nonetheless stands as a testament to the charisma and memory altering abilities of Schwarzenegger that I still recall this fondly for some reason, even though a recent viewing and reality suggests very different.

Final Rating – 5.5 / 10. Many Arnie movies demand inclusion in your DVD library. This is not one of them. But neither should it be incinerated like Jingle All the Way…