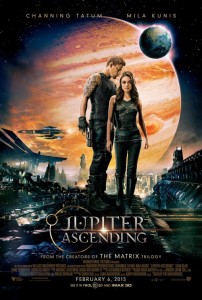 Jupiter (Mila Kunis) might have an astral name, but she is so very far from that. Initially. Daughter to a hard working mum striving to keep the ends meeting and a father who died violently before her birth, Jupiter assists her mother for long hours cleaning homes she wouldn’t dare dream of living in.

But even if she did dream, she couldn’t dream big enough for what follows.

One day scrubbing the toilets of the rich and famous, the next embroiled in an intergalactic war seemingly being waged by two jealous brothers. One a mild mannered nice guy, the other more obviously nefarious, though he strangely talks like an asthmatic lizard.

But the space guys tell Jupiter she’s royalty, then a convenient swarm of bees prove it beyond reasonable doubt…

After the initial tussle destroys much of Chicago – don’t worry, it’s insured – the action moves to space, where the sheer weight of ideas threatens to overwhelm a plot already straining at the seams. There are power struggles, the inevitable rebel group rising to prominence, betrayal, backstabbing, and a novel solution to the secret of human life.

Mila Kunis has made the ‘I’m just a regular gal even though I’m so obviously beautiful’ thing into Her thing, but that looking at everything sideways thing has me concerned for her neck. Channing Tatum tries gamely, but is hampered by an outfit that has him looking like a 98 Degrees reject. Eddie Redmayne is the guy with the wheezy reptile voice, which just gets more annoying the longer the film runs. Which is to say slightly too long.

Running a lean – for the Wachowskis – 128 minutes, the film could have been more effective by cutting a couple peripheral characters, and especially the intolerable ‘processing’ sequence where they struggle with the administrative burden of the hackneyed ‘how can I get id if I don’t have id?’ conundrum. Easily the most overdone and pointless five minutes in the film.

The film is similar to the similarly reviled John Carter in that way, which is probably the most apt comparison. Both films aim for the stars but are too muddled and overstuffed to reach those heights.

Final Rating – 6 / 10. Some good ideas weighed down by some bland ones. Jupiter may gradually ascend, but it will never soar until she sheds a couple subplots.