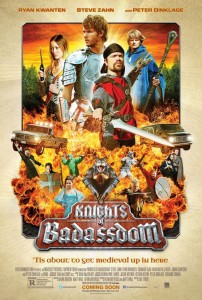 LARP = Live Action Role Play. If you didn’t know that until just now, there’s every chance you have real live, human, friends.

LARPers are those that enjoy dressing up and meeting with other like minded individuals to play act as individuals or groups of people that they admire. These figures are often long since died out (Druids, Medieval knights) or are mythical figures that never existed in the first place (vampires, rational Justin Beiber fans).

The thing they all have in common is the desire to be someone else and a willingness to pretend.

The Knights of Badassdom is itself a LARPer. It has seen a great many films that it admires, and this film proves its willingness to copy them, although not the skill and creativity required to do them justice.

Here are filmmakers that saw Evil Dead, the Pick of Destiny, Role Models, (and probably Slither and Tucker and Dale vs Evil) and thought “we too!”

Alas as LARPers the world over prove every weekend, commitment, belief and nifty outfits isn’t enough to make you what you might desperately aspire to be.

Some LARPers find a book and read a passage from it, bringing an evil demon witch succubus to life. Gasp! THEIR SINCERITY DOTH MAKE IT REAL. (If that isn’t enough, there were two other blatantly obvious Evil Dead rips in the first two minutes.)

A large group of LARPers attend an event in the woods. All the jokes are here; they’re nerds. They take it too seriously. They can’t talk to girls. They start sentences with ‘verily’ and end many words with unnecessary ‘eth’s. (Think: this movie sucketh).

The Pick of Destiny section

The one thing this film will teach you, is that while ‘Larp’ and ‘Larf’ are but one (misspelled) letter apart, they are rarely to be used in the same sentence, let alone an 80 minute film.

Aside from an ending that might work if you’re high, this is a cataclysm of laziness. If this is the height of comedy, then so too are jokes about airline peanuts, black people being cooler than white people and old people being old.

LARPers might be an awkward, slightly pathetic group, but at least they keep to themselves. So we should leave them alone. The Knights of Badassdom has posters, DVD covers and trailers suggesting we should watch it. Consider this an open invite to ridicule.

But it comes with a cost… Two hours, five bucks and an inevitable feeling of regret.