Tenacious D in the Pick of Destiny (Review) 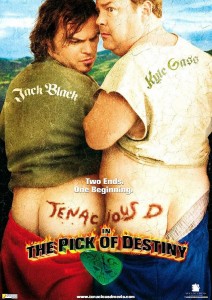 I know. Almost TOO sexy right?

When the self titled Tenacious D debut comedy-rock album came out over a decade ago (WOW!) I bought it with minimal expectation, then was blown away by how hilarious and *GASP* musically proficient it all was. Jack Black is a very competent vocalist even when being ridiculous and the all star session band that they put together boasted enviable credentials.

So when they announced that a movie was to be released spotlighting the ‘D’ I was trembling with anticipation like a dog hearing ‘walkies’ for the first time in weeks.

Unfortunately the brilliance, consistency and hilarity that they managed for the hour long album couldn’t be replicated here.

JB (Jack Black) and KG (Kyle Gass) have been rocking balls out since their respective childhoods. The film shows us the group’s true origin – thanks to an especially persuasive rock poster blu-tacked on young JB’s bedroom wall, and all the trials and tribulations that go with being just about the mightiest awe-inspiring  rock and roll duo in the known universe; that no-one has ever heard of yet…

The title refers to a mysterious guitar pick that the ‘D’ notice all the true rock greats have possessed at some time or other, they realise that it has especially satanic – therefore good for rockin’ – origins. Therefore they simply must have it to complete their rise to acclaim.

Their journey is demanding on their time and friendship and their resolve is tested. Unfortunately the journey is also pretty dull and the middle third of the film will test the resolve of even the most die hard ‘D’ fan or comedy viewer.

Fortunately though the film has a few strengths, it is bookended with a strong opening and closing quarter hour, and the everyday trials and tribulations of the ‘D’ are usually quite amusing also. The best part of the film is that the inevitable cameos are spread out across the running time, and better still serve a purpose in the plot, they aren’t just ‘oh look, there’s ‘Insert Reality Star Moron #6’ or ‘So hot right no but soon to be forgotten Starlet #17’.

Of course being a rock n roll road flick there are numerous songs filled with braggadocio, profanity and pomp – none of which challenge the reign of the finer moments of the debut album I’m afraid, and the obvious shoestring budget is overcome by some quirky set pieces and well chosen locales.

Final Rating – 6.5 / 10. I liked Tenacious D: The Pick of Destiny, I deeply wish I really, really liked it for good reason, instead of because I want to. The good start and good finale helps, but the bland sections betwixt stymie any thought of this being the Greatest Film in the World. Or even a decent tribute.