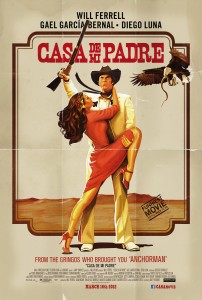 I am on record frequently accusing Will Ferrell as being one of the laziest guys working in film today. Insert Will in traditionally staid situation and give him free reign to yell pointless ‘ad-libbed’ phrases while in various states of undress. Count your cash.

So when I heard that Ferrell was to star in a comedy with the dialogue entirely in Spanish, I was intrigued. This sounds like more work, more care, more daring, more ambition than the man has previously shown since Zoolander.

I shouldn’t have jumped the gun. Trying something different is no guarantee that it’ll be any good.

Ferrell stars as Armando, the humble hardworking farmhand son of a proud ranch owner, whose life is thrown into disarray when the return of his brother and his gorgeous fiancé hurtles the entire ranch into a dangerous drug war.

Essentially this is the same plot as The Three Amigos, with similarly stupid jokes, beaten to death cliches and unforgivable blandness.

Final Rating – 5.5 / 10. All Casa De Mi Padre proves is that Will Ferrell can be lazy in two languages. He is bilingually bland.