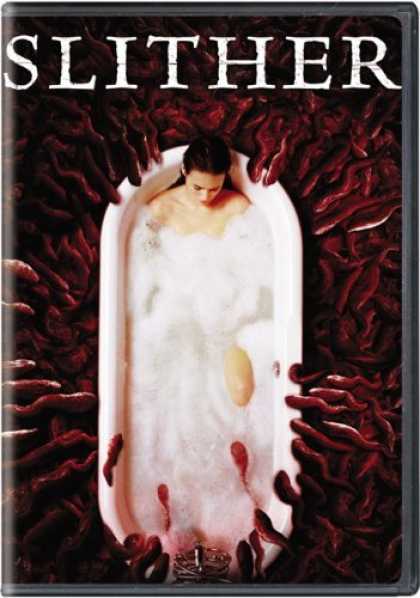 Comedy doesn’t have to be all “why did the chicken…” or “my gosh I can’t believe Jason Biggs just drank that!” all the time. Sometimes it can be the compounded effect of a series of elements and incidents so absurd that you can’t help but laugh… If done well that is.

Infestation recently made a valiant attempt at eliciting yuks from the “yuck”, poorer efforts include Trailer Park of Terror, Doghouse, Lesbian Vampire Killers and Dead Sno. It seems that lately there are almost as many comedy/horror combos than there are straight horror flicks.

But when we are talking “All-Time” stuff we really need to narrow our scope down to the following:

(And I’ll allow “An American Werewolf in London” for some retro flava.)

One notch down from these (and alongside Planet Terror), is Slither, an excellent addition to the genre and a film that I can (and have) watch again and again.

A good old fashioned space rock lands in the outskirts of a quiet rural (read redneck) town, bringing with it the seed of an otherworldy being… that’ll be more important later, much more important.

Let’s take a little step back, Slither has many main characters running all over the shop, each of them played by real character actors who actually look like real people and not movie stars or career extras. But the film has the common sense to basically stick to 4 main characters, and one of those is dragged into the action half way through.

Bill Pardy (Nathan Fillion) is the Sherriff of the sleep town, a young man who has progressed rapidly, perhaps due to the ineptness and unreadiness of those under his command who we meet through the film. Bill holds a rather large candle for…

Starla (Elizabeth Banks), whom he grew up with. Starla is a beautiful young teacher who grew up poor and apparently latched on to the first wealthy guy she met, who happens to be…

Grant Grant (yes X2), played by Michael Rooker. We never work out what he is supposed to do but he is an independently man who is a little perturbed by the lack of reciprocity from his trophy wife at his repeated advances. Put more simply the bedroom side of the marriage has lost… momentum.

One such refusal sets Grant Grant (GG from here) off into the night in search of alcohol fuelled relief, when more tangible “relief” arrives in the form of a young bar slut woman, and in a backwoods stumble he and the skank come across our buddy the space rock from the first paragraph. As another crappy film I watched recently said “I love it when a script comes together”, or something similar. The rock held a cow tongue sized wormy looking thing that promptly leaps somehow and affixes itself to GG’s chest and embeds itself in its new “host”.

To this point the film was frequently funny and had already introduced likeable characters spouting snappy and often quotable dialogue. From here on in the absurdity factor kicks in, and Slither is basically equally hilarious and awe-inspiring from here on in.

GG seems a little “off” after his late night trip to the woods. 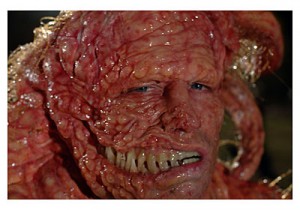 Upon his return to his marital home he becomes quite secretive, going as far as creating some sort of den in the newly locked basement. He also begins to crave meat, nothing wrong with that of course, but suffice to say he isn’t too discerning about the source.

After the annual opening of the Deer hunting Season where Bill and Starla have a brief chat that proves both are aware of the urges, but that such a union is impossible, Starla heads home where she finds GG nowhere to be seen..

All the while GG and the creature had been battling for control of GG’s body, and it appears that GG lost. What follows is one of the weirder “love” scenes in cinematic history since Sylvester Stallone and Sharon Stone got it on over a decade ago. When GG heads home and finds that Starla has lost the desire for his “chest tubes” (yeah I said it and you read it) the GG creature goes on the lam. 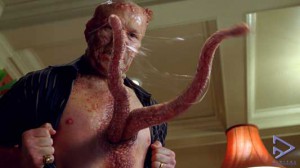 Confused as to what might cause a grown man to spout tentacles and eat stray dogs Bill and the police force set up a sting to find and catch him, as word arrives that GG is preying on local livestock. Starla tags along, as does the local foul mouthed sleazy mayor, (who provides further comic relief along the way, mainly through his disbelief and reactions).

The hunt leads the crew to a barn in the middle of nowhere, the barn houses GG’s “special lady”, who is swollen and ready to “drop”. When she does almost on cue all shit breaks loose. GG’s “babies” start possessing any and all locals, human or otherwise, including very nearly a young girl named Kylie, who informs all and sundry that all worms and their hosts are controlled by one superbeing from another planet, and that they are all working towards one goal. (The goal is similar to that of Genghis Khan some time back, and all he only wanted to control was the entire world.) 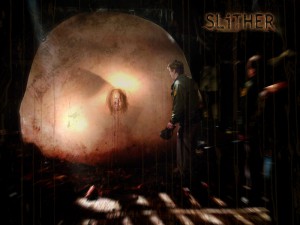 It took 63 years to lose the baby-weight…

So the remainder of the film has Bill, Starla and Kylie trying to decide whether to escape or fight, all this changes once Starla is taken…

The film is hilarious even before the insane makeup and creatures are introduced (GG’s pregnant girl needs to be seen to be believed, as does the “birth”), and only gets funnier as the film progresses. There is some effective OTT gore that is intended to disgust in a funny way, not for scares, and the finale tops everything off as Bill goes mano-a-whatever-o versus Grant Grant and his ever growing conglomeration of random flesh. 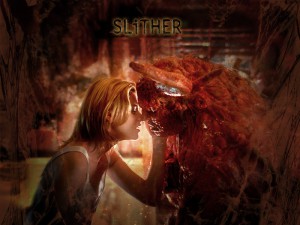 Final Rating – 8.5 / 10. In case you can’t tell I love Slither. Gross out comedies are mostly flawed and lazy, Slither shows what can happen when funny meets well thought out and carefully plotted gross. More of this please!