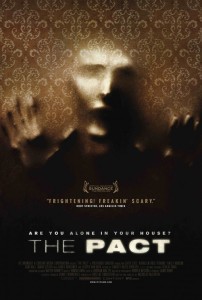 Like The Descent and Session 9 before it, The Pact will work best the less you know in advance. So scurry off, watch it and return. I’ll wait…

Oh you’re back. Dumb title wasn’t it? Nothing to do with the film right? And the poster too!

Nicole and Annie have not been home since they became old enough to get the hell out.

Despite bad childhood memories they agree to return for the first time in many years after hearing of their Mum’s death, though the agreement is not readily reached.

By the time Annie arrives it seems Nicole has already been and gone, and when she misses the funeral the concern level increases. Has the former junkie suffered a relapse or is something more sinister behind the no show? Meanwhile lights flicker and other things go bump in the night.

A well stubbled cop (Casper Van Dien) provides only doubt and dubiousness, before a scrawny and pasty junkie girl helps join the dots. Seriously where would we be without junkies?

The Pact is far better than the Frighteners wannabe poster and empty title would indicate. It peaks early, but after a flat spot manages to reignite interest in the second half of the film, with some solid tense spine tingling moments and a couple of reveals that will have you grinning. It’s unfortunate then that it vanished without a trace, given that it should be in the same class as recent successes The Conjuring, Sinister and Paranormal Activity.

The issue is lack of star power, Caity Lotz is impressive as Annie, but her lack of name recognition means hardly anyone will ever know this. Here is a film held back by the lack of an Ethan Hawke, a Vera Famiga, (or possibly one less Casper Van Dien) from a solid 50 million dollar box office. Perhaps the most disappointing aspect is the fact that none of those guys n gals are household names – I reckon they could have found one and made a bundle.

Horror is big business nowadays. Makes no sense having a decent product to sell and then not having a single known endorser to spruik it on talk shows.

Final Rating – 7.5 / 10. An effective horror-thriller combo with a better explanation and reveal than most in the genre.