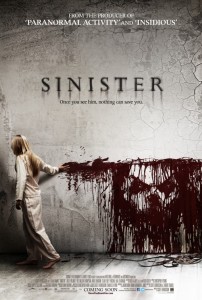 First of all, great poster right? The film itself might have trouble in backing it up, but for the most part it tries hard enough for just long enough to earn a commendation.

Ellison Oswalt* (Ethan Hawke) is a renowned true crime writer with a series of novels that endeavour to step into the criminal’s shoes to take things a step beyond the norm. An earlier book actually had Oswalt coin a theory that ended with the apprehension of the perpetrator of the heinous crimes.

Unfortunately while more recent books saw Oswalt continue to follow up hunches and second guess findings, they were less successful. That is unless Oswalt gauges his success by the level to which police officers hate his existence, in which case he is hugely accomplished, as is made evident on the very first day he and his family spend in their new town.

It has been over a decade since he has had a hit, and with two mortgages and a family the pressure is mounting. Further to this Oswalt also has a big of an ego of his own to nurture, evidenced by his ready stash of his own books for signing and gifting, and his solo watching of his own TV interviews from the glory years of days long since passed.

Now on the trail of a mass killing that ended with the deaths of four people and the disappearance of a young daughter, Oswalt moves his family not only to the town where the crimes were committed, but into the very house where the family once lived – and died. However he omits this tiny factoid when convincing his wife and two children of the merits of taking the whole family across the country to a new home.

After all, forgetting to tell the missus that you have moved her and the kids into a multiple murder home could never backfire on anyone could it? Especially given that the family already has problems of its own to deal with. The oldest child has night terrors, the youngest resents the move.

Oswalt’s wife has reservations also, but more for what she sees the work do to her husband, who works long hours alone in a specially built and well appointed home office. The office remains closed and locked when Oswalt is out to protect the rest of the family from unwittingly seeing the graphic evidence often pinned to the walls within, and Oswalt finds himself spending more time in the room as his investigation and research progresses and he spirals further into the case.

Then in the first few nights Oswalt makes a huge breakthrough. He finds a box full of Super 8 reels that have innocent titles but extremely incriminating footage that clearly shows several mass murders – including the killings of the former residents of his very abode.

The sudden appearance of these home snuff films is as unexpected as it is unexplainable. Oswalt opts not to go to the cops. They already hate him. And continues the research himself, bottling up the reality of the situation from his family. But watching and analysing the films repeatedly is hard going, so he turns to hard liquor to help the nights pass.

Oswalt doesn’t do it all alone though, he co-opts a fresh faced cop (not yet tainted enough to hate him) into the case with the implication that an author’s acknowledgement might be on the way in the finished book, and Vincent D’Onofrio plays a noted specialist in the paranormal with whom Oswalt regularly Skypes. An expert whom I might add tells Oswalt of the possibility that a demon named Baaguul is somehow behind the murders that are decades apart.

Then the nights start giving even more reason to drink. At first it is bumps, then noises, with the severity and extreme nature of the contacts becoming ever more evident as the film continues. In these ways Sinister is kind of like Insidious, only without the descent into near parody that killed the early effectiveness of that film.

These inhuman interactions become more blatant and frankly less effective. It definitely doesn’t help that the sequence so obviously meant to be the film’s centrepiece sucks so very badly, and Oswalt; BUY A FUCKING TORCH! Fortunately the first hour is very good and builds the tension well, generating enough credibility to make the more silly and incredible stuff that follows (mostly) forgivable.

Sure the Big Scene and for that matter the ending both kinda suck, but the early going is very good, the first hour effective overall,. For some reason grainy old videos and scratchy audio recordings have always been such good friends to the horror genre, check The Sixth Sense and Session 9 for better examples.

Sinister is hardly great, but when you come back to the core aims of a horror movie – namely to unsettle and disturb – you can’t argue that for at least an hour it more than does its job.

And for the record most of the music and sound effects in the crucial first hour are superb.

Final Rating 7.5 / 10. Sinister doesn’t have the legs to continue to greatness, and rewatchability will suffer after the reveal, but if its scares you’re after, only Grave Encounters had me using the edge of my seat more in 2012.

*  I read Ethan Hawke’s character is named after a writer and comedian Patton Oswalt. Note I chose to use the Oswalt name throughout this review as a signal that he represented the good parts of the movie. Ellison represents the dodgy bits and silliness.