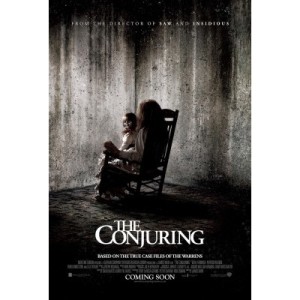 The 60s have just rolled into the 70s, and the Perron family are excited to be moving into their new expansive home in the country. The early days provide much excitement for Dad Roger, Mum Carolyn and their 5 (!) young and spunky daughters.

The new digs have many rooms and mysterious wardrobes, even a musty cellar. There are fun and games for all. Enough frivolity even to overlook the odd occurrences that commence almost immediately upon their arrival. The clocks that stop at the same time every night (one wonders how they restart to restop the next night), the doors that creak and shut by themselves, the suicidal birds, the tots who hold animated conversations in seemingly empty rooms. Even the family dog not lasting beyond the first night doesn’t perturb as much as you might assume.

Within a couple more nights things heat up even further. A sleepwalking daughter. Another who is constantly being rudely woken by unseen forces. But it’s only when Mum has a disturbing experience while playing the kid’s favourite game ‘Hide and Clap’ (a dry version of Marco Polo) that someone thinks to seek professional help.

This comes in the form of Ed (Patrick Wilson) and Larraine (Vera Farmiga) Warren, ‘paranormal experts’ who have accumulated a large collection of macabre curios and keepsakes across many years of ghostbustin’. Far from merely debunking claims, the Warrens go as far as identifying the ghost/demon/spirit providing the disruptions, then instructions as to how to move them on or eradicate them…

Of course the ghoulies in the Perron house are particularly stubborn.

The Conjuring carefully builds the foundations for the first 40 odd minutes, then the levee breaks. Only unlike Insidious the scares and jolts don’t come a mile a minute at the expense of credibility. Here they are teased out for minutes at a time. Wan cannily shows us that he is lighting the fuse on the firecracker, but refuses to tell us how long the fuse is. So we sit on the edge of the chair waiting for the inevitable ‘boo’ moment. At times the wait is interminable, which makes the ‘gotcha’ somehow more rewarding.

Insidious suffered by trying to cram the scares in, feeling that the constant jolts would bring more adrenalin. It did this at the expense of tension – and for mine credibility and enjoyment. When you are dealing with ghosts and such, an element of impossibility is inevitable. Too much impairs the willingness to suspend disbelief, not enough is simply boring (hi Ti West!). This film often gets silly, but never stupid.

The Conjuring has no less than half a dozen sequences to get the hairs at the back of your neck standing on end long enough to wonder if they took a blue pill, and on more than a few occasions the payoff elicits a guilty grin, earned from knowing that even jaded horror fans can get sucked in by genre clichés if they are done well enough.

There is not one notable new aspect of The Conjuring to set it apart from the pack. In fact I could trot out a laundry list of recent films that it stole from was influenced by, Paranormal, Sinister and the director’s own Insidious among them. But what James Wan did this time was cherry pick out the most effective bits from each of the afore-mentioned, and piece together his own 100 minutes Frankenstein’s monster of horror off-cuts.

Sure the clichés and horror staple elements are there, but only the ones that worked to make the film better and more effective. When compared to the often ridiculous Insidious, this leaner and definitely meaner approach is light years ahead, and infinitely more effective.

Final Rating – 8 / 10. The Conjuring is a fine example of addition through subtraction, and probably the best commercial horror film of 2013.