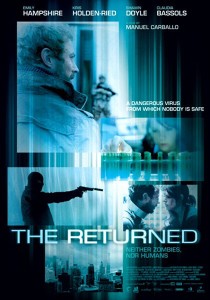 Being a zombie in the modern world is a real problem. A death sentence if not treated within the first 36 hours. But we can fix it. Or at least hold it at bay. With medication.

But don’t skip a dose…

These people dealing with the affliction are called ‘the Returned’. They are as they were prior to the onset of the disease, though a little more suspicious and guarded.

The non-afflicted public look upon them as ‘ticking time bombs’. Potential threats that can trigger a global pandemic just by issuing an injection, thereby permitting the virus to once again take charge of the blood lust impulse. For the Returned who have so far protected their secret, the announcement is akin to telling your parents you have AIDS.

Loved ones hide their trepidation behind the occasional forced smiles. Others are more overt.

And in the middle is Alex, a guitar teaching Chris Martin lookalike, and his wife Kate, a wide eyed doctor who treats those with the disease in her hospital.

I see your black and white flashbacks. I hear your plaintive piano plinking. I watched the misty eyes and distraught expressions of character torn apart by tough decisions. I am unmoved.

No zombie movie should have more fake tears than fake blood.

With a million new zombie movies released every year it’s understandable that the genre would grow tired. So tinkering with the formula and angles is perfectly reasonable. But the strength of the zombie film isn’t the alienation and isolation, it’s the teeth sinking into living flesh, the imminent peril posed by the shuffling and dogged undead. This seems to be a deliberately pious AIDS parable that deals with the emotional impact felt by those on both sides of the disease. Haven’t we had that already with Philadelphia? With Dallas Buyer’s Club?

Don’t put a collar on a hippopotamus and try to tell me it’s a new puppy.

Final Rating – 5.5 / 10. Sure the zombie genre might be in danger of growing stale, I don’t think seriousing it up is the answer though.