The Devil’s Own (Review) 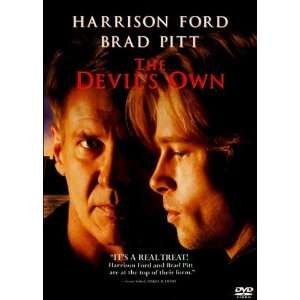 Frankie McGuire (Brad Pitt) is a very dangerous man. More dangerous than any man named Frankie has a right to be.

An IRA ‘freedom fighter’, Frankie is the man behind many killings and terrorist type incidents across Ireland, all aimed at forcing the English out. With many of his allies dead or captured and the net closing in, Frankie escapes to the United States in the hope of securing a game changer, Stinger missiles capable of blasting the English back across the border.

In the United States Frankie adopts a new name (Rory) and a hastily arranged place to stay with another ex-Irish family, that of the O’Mearas. When the agreed upon timeframe is pushed out for the missile purchase, Frankie has no option but to hold tight and wait. It is during this time that he becomes close to the O’Meara family. The kids keep him amused, Mrs O’Meara keeps him fed and Tommy (Harrison Ford) keeps making sure that Frankie has everything he needs.

Well everything but the missiles. They prove harder to secure than you would think.

The Devil’s Own has an interesting dynamic for a while, what with the wolf in Pitt’s clothing laying low amid a friendly family of sheep, but ultimately while it is a good example, it is the same film you’ve already seen 27 times, and with one guy an IRA terrorist, it should be no spoiler to suggest that there is but one way that this can all end.

Final Rating – 7 / 10. The Devil’s Own task would be promoting this thing: ‘Pretty terrorist requires bed-sit with happy oblivious family’…