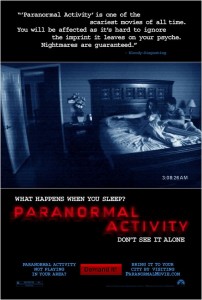 All this Activity is just so damn Paranormal!

This is hardly a massive plaudit, but Paranormal Activity might have been the only film that I watched in recent weeks that was better than I expected going in. I think that was because I had very low expectations though, as this is just not as scary as it is made out to be.

Shot doco style in and around one house, this is the ultimate in low budget shoestring filmmaking, and is effective in maximizing what it can from minimal surroundings and FX.

The film is supposedly the footage shot by a young couple in San Diego in 2006, who determine that their house is haunted, or more specifically that one of the occupants is haunted. This point is not really argued but taken as fact, both the partner Micah and the haunt-ee Katie frequently speak matter-of-factly about the “force” or “demon” or whatever and just accept that it is there.

As the film opens they are setting up a camera purchased to document events while they sleep, and the camera seems to roll at all times, while they chat, eat, and generally loll about the house. So we have less a plot than some stuff that happens while Micah and Katie go about their daily existence. Katie is a student and Micah is apparently a day trader, which must mean he is a good one as they both live in a very nice looking (and definitely not cheap) house.

Where relevant, and it needs to be said tension building, the date and time appear onscreen, so that we might see long periods of inactivity in a short space of time, this is especially important in the night scenes. The camera is especially well positioned, so that we can see both Micah and Katie as they sleep, and a conveniently opened door on the left of screen, where for 90 minutes we constantly wait for something, anything to appear.

It is the wait that is more nerve wracking than the events themselves. By not showing anything our minds go to places that could not have been possible on a film with a $15,000 budget, so the viewer’s imagination should be credited for 90% of the scares.

(This reminds me of a story told to me by someone I worked with years ago. We were discussing bad food experiences and they said something along the lines of “Well after what I saw working at KFC I’ll never ever eat that again!” When pressed for details we were simply told “No it is too horrible, I can’t say it.” Being a guy with an active imagination I instantly thought of several things that were likely far worse than the reality, four-legged chickens, giant pus-filled abscesses etc, but it didn’t matter what we said I never found out the depth of the KFC grossness.)

As time elapses it becomes very clear that the two are not simply delusional, as over many nights evidence mounts up on the film and sound recording devices. Early on they solicit the advice of a psychic, who seriously explains various scenarios and calmly informs Katie that it is she that the whatever is after, and that moving or running away won’t help. So it seems clear that the demon/ghostie things either has sat-nav, or that Katie needs to block it as a friend on her Facebook page.

As the severity of the “symptoms” and encounters escalate, the usual cinematic devices are brought in, rippling bedsheets, slamming doors, on/off lights and my favourite, the hissing audio turned up loud that has an unearthly voice on it. (Never fails to get the hairs on my neck to stand up that one. The Sixth Sense one was best.) Most of the action comes to light the next day when Micah goes through the tapes.

It must be said that there are some discrepancies here, it seems that Micah feels this is more of a lark, he taunts the being and tries to lure it out and I guess catch it or something. Katie explains that she has dealt with it for years and is far more cautious, she wants to bring in an exorcist type person, and often complains about the camera as being an irritant to both her and the beastie.

Micah is both more understanding than I would ever be (I would ask a few more questions if my wife stood over me vacantly staring while I slept for two whole hours and then claimed not to remember anything) and inflammatory, mocking Katie at the same time as he watches hard evidence that she is largely correct in her fears. He ultimately does stir shit up when he brings a Ouija board into the house despite Katie’s misgivings, and though he doesn’t get the chance to formally use it the presence of the board does have an impact. (A pretty cool one too.)

There is a leap of faith required by the audience about an hour in that I never really went for as it seemed just a little too far fetched, and yes I realize I am watching a movie about ghosts and that leaps of faith are necessary to enjoy the film.

The movie culminates in what I now know are two endings, having read about the other on the net. There was the original, more low key ending which I witnessed, and the more over the top one made for a wider release to US audiences. Having seen one and read about what happens in the other I think I prefer what I saw as it seemed to be more in keeping with the film’s tone. But that is not apparently what the American audiences want, as this film is now the highest grossing R rated flick of the decade.

The best bits of Paranormal Activity are 30 seconds snippets of very effective and audience manipulating filmmaking, the other 99% is OK, though they could have easily cut 10 minutes out of the first hour without a complaint from me, as it did drag along at times.

It seemed that the daylight hours were simply there as an intermission between the scary parts that went on while the couple slept. I think the fact that I have watched so many horror movies hurt me a little here, as I am very patient in waiting for the next scare, and “BOO” moments don’t have nearly as much impact seeing that I have sat through thousands over many years.

I instinctively kept glancing to the corners awaiting something dreadful, which is why kids are afraid of the dark in the first place isn’t it?

Final Rating – 7 / 10. Like having a great song as the closing track on a bad album, you finish happy but wonder of the first hour or so was really that necessary.