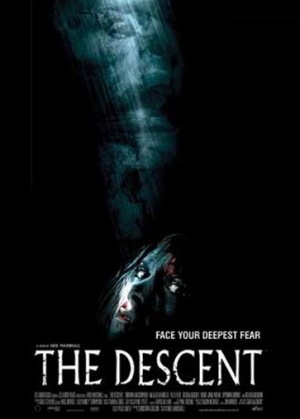 Don’t try to sell me the cheesy Dali rip-off poster.

Every year Sara, Beth and Juno meet for a thrill-seeking holiday in various parts of the globe. At the commencement of this film they are whitewater rafting, and Sara has brought along her husband and young daughter Jessica who is 5.

A tragedy befalls the family, and next year it is agreed that they will meet up again in the United States to explore a caving system with three other similar minded lasses. Sara is obviously still coming back from the depths of depression caused by the untimely incident on last year’s journey, and Beth, Juno and the other women take great pains at incorporating her into everything and making sure everyone feels comfortable and welcome.

The three new Dora the Explorers include sisters Sam and Rebecca, and Juno’s younger ‘X-treme’ protégé Holly, who is cocky, brash, and annoying after the first 40 seconds. 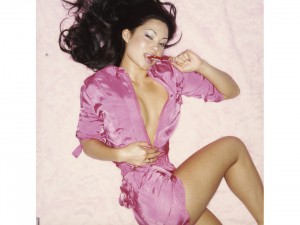 The team are not due to embark until the next morning, so they spend the night drinking and talking, meaning we as the audience get to know most of them quite well. I won’t go into too much detail of who does what, suffice to say there are more passive and more dominating/controlling figures, one woman is often unintelligible (I seriously turned subtitles “on” for one viewing just to see what she actually said a few times)… and Juno is hot.

Unbelievably hot. Even when she gets covered in mud, blood and guts later in the film.

The early going has more about meeting the characters and building the plot, so there are not many opportunities to insert genuine scares, so Neil Marshall does what I normally hate and includes a couple of cheap “BOO” shocks that rely more on a lack of expectation and a loud noise. While my standard response is to cite laziness on behalf of the director here both early scares work extremely well – so I am forced to give Marshall a pass.

After the first bonding night the girls head off to the caving system to get their spelunking on. As they proceed deeper and deeper through the narrow passages and cracks it is evident that this is not a cave designed for fatties, even the experienced cavers are puffing and squirming through the crevices, with only their headlamps to light the way. Claustrophobics *raising hand* need a warning that this section of the film manages to get the heartrate ticking a lot quicker, I for one always am glad when they move through the early stages. 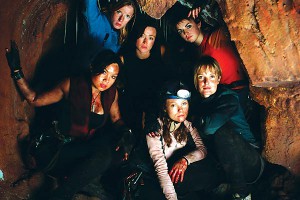 (I watched the special features on the disc once and discovered that for most caving scenes the same prop length of tunnel was used, it was simply turned and rotated so that it looked different with the various camera angles – all I can say is that it looked effective enough to me.)

A few hours in disaster strikes, a cave-in behind the women means that the planned exit is no longer available. Juno then reluctantly admits that she has lead them to a different system to the one planned, as she felt the original plan was too baby-ish. Unfortunately as the emergency notification and plan was lodged for the wrong system no-one knows where they are even if they recognise they are missing… and with no known exit in this unexplored system the team are running out of both options and patience.

After calm is restored the women move forward deeper into the cave in search of another exit – and the final third of the film starts.

As much of their climbing and caving equipment was lost in the cave-in the women make do with what they have, leading to some particularly hairy climbs and crosses and a few mishaps, some minor, one it’s fair to say more major in outcome. As they progress there is evidence of others passing through the caves – this is deemed a major plus because if others were here then there must be a way out.

A great reveal heightens the peril that the women find themselves in, and it is immediately evident that they are indeed not alone. The final half hour is sweaty and blood soaked, as tends to happen in horror films the women split up into ones and twos, some lose composure and others react with unexpected efficiency and determination – not always a good thing mind you. 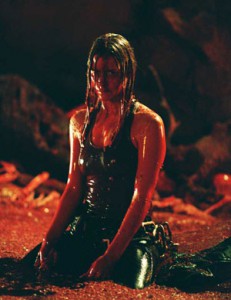 How do you get that sunburned in a cave? Ohhh that’s not a burn…

In among the gore and blood emerges a new wrinkle that altered the fragile dynamic of the group even more, something that was again utilised in the unfairly canned sequel which was really only guilty of mimicking an all time classic.

The acting is great and goes far beyond the usual shrieking and screaming – though there is some here, but totally warranted – the women each have their own personalities and strengths and they remain true to them for the main part, and each of them is far more than merely oblivious fodder.

Neil Marshall started his career well with the cult hit Dog Soldiers, a film that took a ridiculous premise and made it fun, then came The Descent and I immediately signed up as a card carrying fanboy. Doomsday basically sucked, seemingly aiming for style over substance and Centurion once again was a couple of cool scenes let down by the other 90 minutes.

Final Rating – 9.5 / 10. I remain ever hopeful that he has another film of the calibre of The Descent – even if it doesn’t eventuate Neil Marshall has managed one film that will forever remain in my rotation and near the top of multiple personal All Time lists.

(When I initially watched The Descent it had zero press and I really had no idea what I was in for. That would be the ideal set up to truly enjoy this film but I recognise that this is nigh impossible with all the hype (duh look up) and fanboy-ness. That being said this film remains awesome even if you’ve seen it half a dozen times… I think I’m up around 8 and still love it.)