For a film that I didn’t even know needed to exist, Evil Dead 2013 was a pleasant surprise, despite the film content being anything but.

A remake in only the loosest sense, Evil Dead 2013 is more a reimagining of Sam Raimi’s low budget masterpiece. The core ingredients remain, but the recipe is entirely different, with new director/chef Fede Alvarez taking the darker alternative. Every. Single. Time.

Back to the ingredients. Take one recovering addict named Mia (Jane Levy), add four well meaning and supportive friends determined to see their friend/ sister dry out and kick the life threatening habit once and for all. Mix in a secluded and family owned cabin surrounded claustrophobically by gnarly and imposing woods. Sprinkle with a feeling of ominous foreboding and escalating dread.

While the first 30 minutes are merely the prelude to the deluge, they do contain a couple of scenes that will be watched through conservative fingers. May I just say that if that proves the case, exclaiming “Oh no they didn’t” a few times is not going to prevent what follows the discovery of the book (bound in barbed wire) in the cellar with the blood stained door.

By this time everyone knows that reading this book is a bad idea. As if the barbed wire wasn’t enough of a deterrent it has scrawled profanity laced warnings boldly emblazoned throughout. And in any case I thought young people don’t read these days anyway? As always it only takes one nerdy bookworm to open the doors the Hell.

The final hour of Evil Dead is relentless and harrowing, though not necessarily clever and surprisingly not very frightening at all. What is most admirable is its intent. This is a film that does not try to ‘one up’ the Raimi original or even expand or reinvent the universe that it exists in. Perhaps the only Raimi staple that remains is the love of gushing fluids, and even those are swiftly jettisoned in favour of self-mutilation and menacing intent.

Evil Dead 2013 is a nasty piece of work, and I don’t intend for ‘nasty’ to infer ‘mean’, just plain old Nasty. 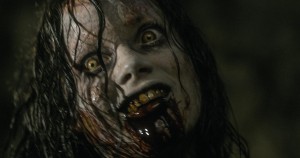 And for those of you (older critics mostly) scrambling over themselves to label this gratuitous, vile and unnecessary, I would point out that beautiful teenagers (almost always played by beautiful 20 somethings) have been slaughtering each other in violent and macabre ways for years. The fact that the beautiful teens in Evil Dead are performing these acts on zombified versions of themselves grants them unlimited license for mayhem in my opinion. Hell I don’t care if teenagers kill each other (on film), why would I care if zombie teens are doing it?

And in the immortal words of Betty Boo, these five teens will ‘do the do’ over and over and over again, using the countless utensils strategically randomly strewn about the cabin and surrounding areas.

Evil Dead 2013 is chock full of clichés but you don’t worry so much when they are used this effectively. I am not saying for a moment that it is a triumph of film making or an astonishing new direction in horror, but I do know that in the last few years there have been a few films I have – for various unknown reasons – taken it upon myself to promote among my friends and colleagues as being more than they appear on the surface.  Black Dynamite. Mega-Piranha. Shoot ‘Em Up. Looper. etc. Films that might ordinarily not warrant more than a cursory glance even from fans of the genre despite being preeminent examples of it.

I am not sure what I wanted with a reimagining of the Sam Raimi film that I am admittedly such a fanboy of. After all this is hardly nece$$ary (or i$ it?). But by taking this ship in another direction Alvarez ensures the original film remains unsullied, and proves himself a director worth watching.

Evil Dead might not transcend horror and it sure doesn’t reinvent it. But by ignoring any black humour, lazy in-jokes and pointless references, and focusing purely on pursuing the most harrowing, guts ‘n’ gore filled outcome possible, it is a welcome return to the world dross like Cabin in the Woods feels itself so much better than…

Breaking the tension and poking fun at the clichés only add value when they are done effectively. If that can’t be done, then by all means maintain the pain.

So brace yourself for 90 gruelling minutes that you’ll tell people about. Then sit through the credits for about 3 groovy seconds.

Final Rating – 7.5 / 10. I don’t think there is a sequel in this material. However despite myself, just for once, I am pleased there was a remake.