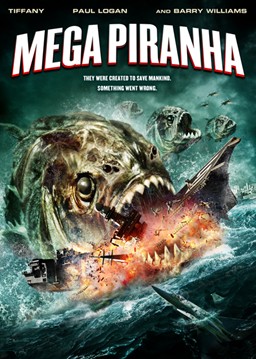 What’s not to love??

In truth I only even rented this as I needed one more film to fill out a month of B Movie haikus and with a title like that what else could this be?

Well let me tell you, Mega Piranha might have atrocious acting, a sub-moronic premise and some of the cheesiest effects in cinematic history but you’ll wait a long time before you laugh more in a movie this year… whether they meant that or not is irrelevant.

Everyone knows the phrase “so bad it’s good”, well this is more “so unbelievably inept on every level that it might possibly be a work of genius!” In all seriousness if the purpose of a movie is to be entertained then the fact that the filmmakers very possibly didn’t mean for the film to be a comedy should be unimportant.

I didn’t laugh at anything this hard for 2 years, even films that wanted to make me laugh weren’t this consistently funny.

So instead of 9 lines of awfully stilted Japanese poetry here is the full review of Mega Piranha, a film that I heartily recommend.

Now the first 10 minutes are only regular bad – but not without chuckles – my notes went like this:

“2 young people go into river for a dip… piranhas eat them.”

“Politicians on a tittie junket cruise the river… piranhas eat them… and the boat!”

It’s the boat part which neatly encapsulates just how “MEGA” this film will be, it wasn’t enough that the boat inexplicably rocked from side to side and that for no sensible reason the morons aboard felt that the water might be safer – THE FISH ATE THE BOAT.

But wait it get’s much better. (Depending on your sense of humour.)

Of course with 2 politicians killed somewhere in South America terrorists are immediately suspected, and a man named Fitch was sicced on the case. Fitch is played by (Paul Logan), a man so buff, so awkwardly serious,  so intense and so awful at this acting thing that I can’t believe he is yet to be picked up by the WWE.

His superior is Bob Grady (Barry Williams – the Brady Bunch Dad himself), Fitch reports back and forth with a phone that is sometimes a video-phone, others not… flexible.

Immediately upon arriving in Venezuala Fitch is beset upon by a scientist Dr Monroe (Tiffany, the 80s one-hit wonder singer of “I think we’re alone now”, which might have referred to a cinema screening Mega Piranha) at the airport. Monroe tells Fitch that it wasn’t terrorists, and that he must look at a nondescript bit of wood as proof.

1/ Not only does Fitch accept this scrap of wood from someone he has never met and as far as he should be concerned has zero credibility. He runs tests on it and decides the killing wasn’t terrorists. That might be the same as me handing you a rock and saying that 9/11 wasn’t terrorists, after all this bit of random rock shows no evidence…

2/ These are some genius scientists – there are three of them, Tiffany, a guy with a wicked-awesome wig, and a nerdy timid guy – give them 12 seconds, no input information and a pen and paper and they can tell you anything. Proof? A two second look at floating wood told them piranhas were responsible. 20 seconds was enough for one guy to state that the piranhas are “doubling in size every 4 days”, before the second solemnly declared that “No, every 36 hours”. Cue gasps and fake looks of anguish.

3/ I’m not sure what Tiffany spent her one-hit wonder bucks on or how she filled out her CV with, but she sure didn’t spend any on acting classes or gym memberships. The only thing keeping her from replacing Kirstie Alley as a punchline of 1000 lazy jokes (many of them mine) is the fact that no-one knows her anymore.

I’ll speed through the rest, lest I get the itchin’ to watch it a third time in a week, but Fitch meets the local army who are horribly un-soldierly and just as equipped as actors. They qare positive that it is terrorists and assume Fitch is only there for a US led cover up.

I kept waiting for someone to say something cheesy like “Do you have any piranhas?” and for anyone to reply “No. Go Fitch.”

The army eventually twigs and a half arsed effort to eradicate this new menace is tried. Now I’m now sure how shooting fish with machine guns from helicopters didn’t wipe them out but somehow some – if not all – piranhas slipped through. Another morsel of scientist genius has them being the size of:

All over the next couple of days. More importantly they are headed straight for America…

I can’t go any further without spoiling the big surprises in store for you – ahh who am I kidding? The rest is just as hilariously insane – actually way more so. 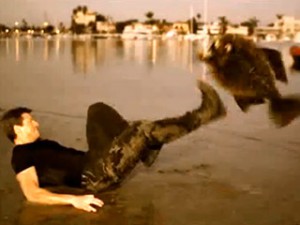 This is just awesomely awesome!

Try these for highlights: 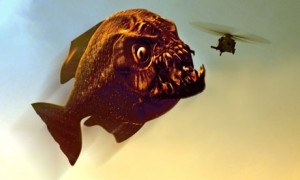 The finale is – in keeping with things – incredibly illogical and made almost no sense at all, but I guess no more illogical than the bad acting tough guy falling for the chunky plain scientist who ate the homecoming queen…

Look, if I haven’t sold you yet then I don’t know what I’m doing. Might I just say that the only film that I watched once, then was immensely happy to volunteer to sit through it again less than 48 hours later was Mega Piranha.

I also think there is a massive chance that I will personally revisit it within the next 2 weeks.

In light of the fact that this might very well be the most accidentally entertaining film in crappy B grade straight to TV history I cannot in good conscience classify it as “Great”, but I will heartily recommend it to anyone with a sense of humour.

Final Rating – 8 / 10. Remember to watch if for what it is, not what it tries to be, and don’t be too fake aghast that you forget to laugh and you might just enjoy this more than a dozen films that try a hell of a lot harder to amuse you.

I’ve watched this once by myself (my wife walked off after 30 minutes) and once with a mate, I loved it both times but guarantee with a small group the WTF? enjoyment factor will go through the roof.