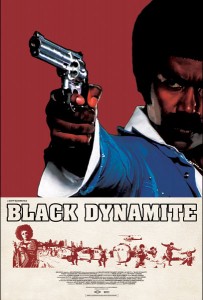 This movie was inconsistent and patchy, and at times forgot what it was trying to do, but I had fun watching it and will probably mention this to friends more than any movie I have seen for a couple months.

Black Dynamite is a rip/homage/parody of 70s blaxploitation films like Shaft, Coffey etc. Black Dynamite (BD) is a local schmoove dude in tha black community who stands up and always does the right thing, and damn the consequences.

In this case his kid brother is killed and he must find out who is responsible and “deal with them”.

The inconsistency comes with the mix between jokes / parody and action, at times there is a scene that is bordering on Wayans’ brothers territory, filled with sight gags and silly puns, then we can go five minutes with almost no laughs in a played straight sequence. It is almost as if they made two different movies in distinct styles and then edited bits together.

No matter, when Black Dynamite is funny it is very funny and eminently quotable:

“I USED To Be an orphan!”
“Bet your sweet ass and half a titty!”
“You can hit the sheets or the streets, no difference to me.”

My personal favourite though happens early, BD awakes from what appears to be a multi cultural 4 way romp, and upon receiving three lots of kudos he tells the women “Shhhhh, you’ll wake the other bitches!” at which time the camera pans back to show more random female arms and legs from other exhausted participants.

The 70s theme is well used, costume, dialogue, film techniques (star wipes and split screens and frequently utilized), and most notably music are excellent, BD even gets his own theme song that is used when he does something cool, which is often.

The action takes BD deep into the hood, where his dealings with local hoodlums pisses off some “Bad rich white guys” who have a dastardly plan of their own, far worse than simply filling the streets with heroin.

Far, far worse if you are a black guy. (Or any guy for that matter…)

A revelation leads BD to rejoin the CIA, where he at least has a license to kill, so he can escalate his search with his homies Bull Horn, Cream Corn and various others.

There are a lot of actors in this that seem familiar, yet are hardly household names, and there must have been consideration given by the filmmakers to stack the film with “name” black actors to capitalize on the publicity. Thankfully this didn’t happen, as it would have been unnecessarily distracting, (“Hey there’s Dave Chappelle!).

Once the scope of the evil plan is uncovered, things move even faster, and the finale shows that the corruption goes all the way to the very top, far further than it seemed for most of the movie. The last few minutes are quite silly, (you’ll see, but it involves a 1:1 nun-chuk fight that can’t be rightfully explained) and there is one particular bit that moved a little too far into “Scary Movie” territory laziness than I would have liked, but all in all this was a more than worthwhile movie.

The similarities to Undercover Brother are also inevitable, and some jokes feel a little “done”. The difference is though that Black Dynamite for the most part feels like you are watching an authentic 70s movie with a few jokes thrown in, and Undercover Brother was most definitely a slapstick jokefest, (a pretty good one too by the way).

I hope this is a deliberate choice to reflect some 70s authenticity, but at times the acting is just terrible, a scene with a white doctor springs immediately to mind.

One last thing: Like Hot Fuzz a few years back, if you take out most of the jokes and sight gags you are still left with a pretty effective action movie, the karate scenes in particular are very well staged and also amusing.

Having been let down (just a little) by a few films in recent days, this was a welcome and unexpected find, I will certainly be watching it again in the next 12 months or so.

Final Rating – 7.5 / 10. If you like Jive-turkeys, jive-honkeys and jive-shut-your-mouths, then this is the film for you.