B Movie Haikus – File under ‘Meh’: Death Race 3 / The Happening / The Bone Snatcher

This time about I’m filing together a few movies that aren’t all time awful. In fact given budgetary limitations and the restraints of their respective premises you could consider these Understandably Ordinary.

Put another way, you won’t go out of your way to bag these films, nor will you look to recommend them to your mates. 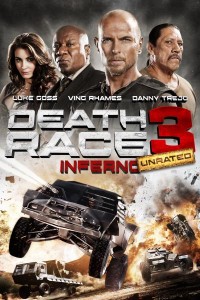 Just getting to the third edition of a franchise is admirable, even more when the first was running on fumes to begin with. But when the entire premise surrounds a faceless anti-hero who exists purely to drive a car around and around in a circle, should it really be a surprise when every film seems to keep repeating itself?

Frank back – win or die try-in’

That and the fact that after the merciful conclusion to another chapter in this most pointless of franchises, the director felt that we the viewing audience needed a ten minute sequence confirming all the ‘facts’ behind the *cough* elaborate goings on. Which makes him dumber than the idiots like me who rented this… 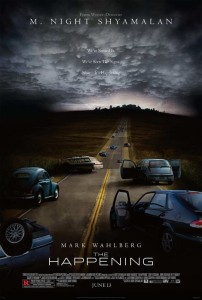 1999 The Sixth Sense
An audacious and inventive mainstream debut. Invented the ‘big twist’.
2000 Unbreakable
Lacked the impact of its predecessor, but an excellent film nonetheless.
2002 Signs
Had the names, more than one twist, and a couple of tense scenes. Just not the oomph.
2004 The Village
All the M Night trademarks are here, it’s just as if they were used by a knock off merchant. And the twist is too little far too late.
2006 Lady in the Water
Never saw it. Am yet to meet someone who did or even read something that suggests I change my status.
2008 The Happening
So it’s come to this… Mark Wahlberg, John Leguizamo and Zooey Deschanel running around pretending something ‘big’ is up.

Nor-mal day in N-Y-C
Un-til… All pause, numb,
Then kill them-selves on the spot

Even if you believe the central premise of a spontaneous suicide forcing… something, can hanging oneself from a tree overhanging a road really be the first option? Or even easy enough to pull off even if it was your Plan A?

After the momentary intrigue and confusion created by the first 20, its likely that the remaining hour of wandering through the meadows meeting nutbags will have you looking for your own sturdy rope and a nice tree to dangle it from.

Sure the above trio of ‘name actors’ are in this, but none can do anything to separate them from the rest of the confused and bewildered. Which makes them the same as us in that regard.

I am confused and bewildered too – as to how M Night Shyamalan managed to bluff his way past Hollywood big-wigs to again deliver another big budget disappointment.

There was a school camp when I was in my early teens. A hot and much sought after female schoolmate kept a small group of us transfixed for what seemed like hours – probably ten minutes or more though – with a never ending joke about a boy who asks for the same thing every Christmas; “I want a red ping-pong ball”.

On and on, year by year – red ping-pong ball. Then the boy, now an old man, is on his death bed. His lifelong friend asks “Why, after all this time, won’t you tell us why you always ask for the same red ping-pong ball?”

The man coughs, painfully forces himself to sit upright, gestures his friend to lean in close… (By this time all the guys in the circle were leaning in too for the inevitably hilarious punch line to this epic.)… The man gasps one last time and says “Well friend, the reason I ask for the same red ping pong ball is… Is…”

The girl laughed uproariously. We all looked at each other and said a collective “that’s it? You can’t be serious!” The moral being, if you want to waste everyone’s time you better be hot. M Night Shyamalan hasn’t been hot since Cole Sear saw dead people.

Final Rating – 5.5 / 10. After the opening moments The Happening is a waste of everyone’s time. M Night should call his next film ‘ The red ping-pong ball’. 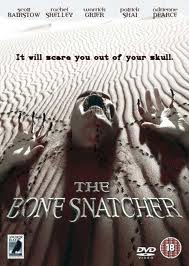 The Bone Snatcher is another low key horror film, one of countless that arrive each year and vanish.

While this film has a few decent scenes and OK acting, the fact is that these films often disappear for a reason, and the few critics that extol them do so more to point out they have discovered something new.

Set in Africa, the film has a truck full of sweaty and disagreeable types coming across something unlike anything they have ever seen as they move across the oppressive desert terrain.

There are about 5 good minutes in The Bone Snatcher, with the rest not horrible but essentially unremarkable.

The good bits owe a large debt to The Thing, with sand and sun instead of snow and wind, and the open resentment and sniping of the crew replacing a paranoia borne of fear.

Unfortunately that’s where the similarities end. Given the choice of organic effects like The Thing 1982 or CGI effects like The Thing 2011, Bone Snatcher’s creators went the cheaper – and cheaper looking path. Even with the closer views that we are afforded later in the film it was still hard to tell what I was discovering.

That isn’t the main problem though, that would be the fact that there just isn’t enough stuff here to stretch into a decent film, even a decent B movie. Bone Snatcher has some good moments in the 30 minutes that matter, just not enough of them to call itself a film.