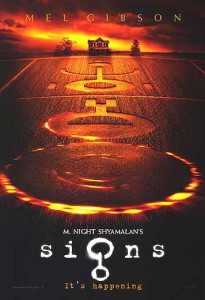 Gee these drunk teenagers are getting creative…

Signs made it three in a row for M. Night Snoogans, both in terms of ‘worthwhile’ status, and more depressingly in terms of reduced impact.

It is a good – not great – film. A film you’d describe as ‘it’s ok… pretty good’ if asked, but nothing more.

It is also the last of M’s films worth watching.

Graham Hess (Mel Gibson) is an ex priest who resigned after losing his faith with the untimely death of his wife, leaving him to raise his two children on their isolated corn farm. The two kids, Morgan (Rory Culkin) and Bo (Abigail Breslin) are for the most part mercifully cutesie-free – though Morgan is a paranoid little asthmatic scientist, wise beyond his years, and Bo is OCD about her drinking water resulting in half full water bottles all over the house.

Rounding out the Hess clan is Merle (Joaquin Phoenix), a failed sports prospect who lives in a granny flat and helps out around the farm.

It starts with crop circles in the cornfields in the morning, then that night the farm is visited, though neither Graham or Merle manage a decent look at the farm crasher. The next day the two family dogs go nuts, and Morgan is forced to kill one as it is about to attack his little sister. When the baby monitor crackles to life with some muddy, indecipherable noise and young Morgan says ‘it’s talking’, everyone just nods in agreeance. WHAT DID I JUST MISS!?! The police are called in only to come up empty. Only Graham doesn’t believe what all the evidence clearly suggests, until even that option is taken from him when the TV provides removes doubt. (Homer would be proud.)

It appears that the crop circles are far from a one off incident. In fact they are peppered all over the globe, mostly near major cities.

As evidence mounts up both on the news and in the backyard, the Hess family ponder their next move – ultimately settling on believing in ominous dime store hack books and wearing tinfoil helmets. People do silly things when they let fear and imagination lead them…

It takes a while for Signs to go from ‘building’ to ‘arriving’, and the impact is diminished by some pretty awful CGI. There is a recurring flashback that gradually unfolds throughout the film. When it starts it seems a little forced, though when the payoff does arrive the impact is undeniable.

This is is the only MNS film without a twist that swings for the fences. It also has a couple subplots that seem forced in when they don’t really belong. Even so this is an effective and brooding thriller telling a global story from the perspective of one family hiding in a cellar.

And unless there is a major twist in M. Night Shyamalan’s career, this will be his last movie worth watching.

Final Rating – 7.5 / 10. A case of throwing every idea left at the screen, some of it sticks, some doesn’t, the end result flawed but effective overall.