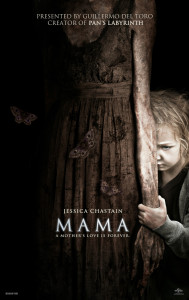 Mama is the busiest, most active and over-protective ghost I can remember. In fact if you replace ‘ghost’ with ‘mother” you might get an idea of just how full this spectral being’s afterlife is. I wonder if somewhere in the afterworld a fat and lazy male ghost named Dada waits on the couch with his hand in his undead pants wondering why the missus isn’t home and cooking his dinner…

And thank someone for Mama, because at one point in the early stages of this film I was worried that it was headed in an entirely different and far more unpleasant direction, instead of the crazy horror fable it became.

Once upon a time, Big Business Daddy snaps. After events not explained he arrives home unannounced and takes his two young ‘sub five’ (?) daughters into the deepest darkest woods. Big Business Daddy is never seen again, even though many look for him and the girls.

A full five years later they do find the girls, now (I’m guessing) 9ish Victoria and 5ish Lily, and my comfort level returns as the film changes from the infanticide atrocity that it looked like becoming, returning to more commercial yet still mostly effective horror.

The two young girls have apparently fended for themselves in a deserted cabin. Eating only cherries and god knows what else (and where the cherries came from).

With no adults to mind them and teach them the girls move like animals, well like spiders actually, scuttling quickly and lunging forward without notice. They become a media sensation overnight. With the talk turning to who will raise these young spiderlings?

An auntie comes forward, but she is passed over for younger Uncle Luke and his rocker – she has an emo wig and tattoos! – girlfriend Annabelle (the omnipresent Jessica Chastain), who is so rockin’ and stuff that she is like so totally,whatever, I mean kids man.

Perfect. Actually one more thing, before the rookie parents take the two feral children under their wings in a large atmospheric stately home they are told one last thing by the girl’s new psychiatrist; the girls claim to have an imaginary friend named ‘Mama’ that watches over them jealously at all times.

Within hours the kids are no longer vulnerable and innocent – albeit with spiderlike movements – but creepy and ominous for other reasons. Only nights later Luke is hospitalised suddenly and Annabelle the unlikely mama is given a crash course in maternal behaviours. Luckily she hasn’t kind but unexpected assistance from another room, and like most Mamas, things get sticky, noisy and at times frustrating and argumentative.

Horror/fantasy doyen Guillermo Del Toro helps himself to a producer’s credit, and while this isn’t always a stamp of guaranteed success Mama is decent commercial horror with credibility and sensationalism in equal measure. For every decent build up there are moments that will have you scratching your noggin, and too often these build ups are allowed to collapse for a cheap scare. Even though some of these work well and the film never settles for Insidious level scattergun frights it is a little annoying.

The things that get me are how no one in the film has ever seen a horror movie. In one scene a character decided to ‘get to the bottom of this’ by visiting the cabin. Alone. At night.

Then, not too much later, another character does exactly the same thing! All that and a finale that both provides exposition and feelings that may leave you underwhelmed. I chose to focus on the superior first hour or so when Mama wasn’t seemingly everywhere and in everything. An hour which reminded me of the better parts of Sinister, which itself couldn’t sustain the momentum through to the end.

So Mama couldn’t maintain the effectiveness of the early stages until the conclusion. Not many films do. It seems that nowadays there are many working Mums out there pulling double duties at home and office and not being appreciated enough for their efforts. None work as hard as this Mama, who tries to raise two girls and scare us simultaneously. For the most part I can give the benefit of the doubt for both jobs. When you spend this much time and effort at something, you need to forgive a few unfinished tasks and rough edges.

Final Rating – 7 / 10. It can’t avoid the slightly silly conclusion, which tries to continually up the ante until it all quite literally falls off the cliff, but Mama is another commercial horror film worth your time.