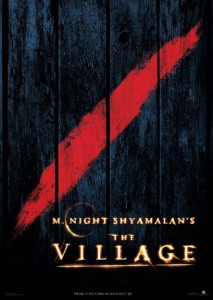 The Village is a small settlement with perhaps 20 townspeople who all dress in traditional ‘neck to ankle’ attire and speak in ye olde style.

The villagers are voiced by a small council of perhaps 5 elders, among whom are Sigourney Weaver, William Hurt and Brendan Gleeson. These people set the rules for the remaining villagers, and they tell of the dangers living in the woods that surround the settlement, beings of which “we do not speak of”, but nonetheless things we hear an awful lot about anyway.

While not described in detail, we learn that these ‘things’ were foretold by previous occupants of the village. They are incited by anything red and placated by yellow, which means yellow is the new black to the locals. The basic consensus seems to be if we leave them alone they won’t bother us.

Except that doesn’t always seem to be the case. Small dead creatures stripped of skin appear near the woodland boundaries, where the young adults stand to prove their courage, and eventually inside the village.

The peaceful – but boring – life of the villagers changes suddenly when the quiet and reserved Lucious (Joaquin Phoenix) takes up with the sensible yet blind Ivy (Bryce Dallas Howard), much to the chagrin of the town’s ‘slow kid’ Noah (Adrien Brody). Shortly after the public announcement of this love, a development occurs that suggests a journey through the woods might be be beneficial to the settlement.

But who will venture into the land of ‘those we do not speak of’, to do ‘things we can’t mention’ resulting in the ‘twist I will not spoil here’?

The Village kinda needed a shake up anyway, both in terms of the film and the place in which all these dull people live. I mean the most interesting residents are blind and quiet, quiet and quiet, and a simpleton.

Party over here! Not really.

The strength of The Sixth Sense was that even without the big twist the film was solid enough to exist in its own right.

Similarly Unbreakable was a film that would have been worth the watch even if something didn’t pop up to surprise us at the end.

When it comes to The Village I am not so sure. The film is all serious and somber to the point of teetering on boring, and where the twist itself is concerned, it is fair to say that it is a notch below Unbreakable, and two beneath The Sixth Sense.

Final Rating – 6.5 / 10. Being a town where nothing happens – nothing we can speak of anyway – is a bit of a drag. The Village has a twist that isn’t terrible, but once you know it the will be no need to revisit this particular town.