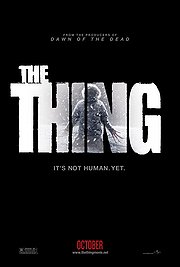 Scientist Kate Lloyd (Mary Elizabeth Winstead) and crew are summoned urgently to Antarctica where a huge discovery of some kind desperately needs their attention and expertise.

Once the small crew arrive they liaise with the staff of the small Norwegian outpost who made the find, and after a few minutes of getting to know you time they head to the site to find a big chunk of ice with an item frozen inside. Doesn’t sound that exciting right, only it
is quite a big item, and it seems to have been there for over One Hundred THOUSAND years.

Kate and crew hoist the huge iceblock and haul it back to the base, where they decide to thaw it out for a closer look.

It seems that the filmmakers here were well aware of the esteemed status in which the original 1982 flick is held by sci-fi/horror geeks, so rather than bother with building suspense they get right to the good stuff. Once thawed this… thing (I avoided the term as long as I could) doesn’t take long to work out the creaks and aches of being frozen for a thousand centuries, it gets right down to making up for lost time.

Where the first film took the time to identify the nature of the foe – it takes over its prey and replicates their form, leaving both host and others unaware of its presence –  Kate and co are a sharper bunch it seems, not that it helps much though, because the thing isn’t shy this time around, CGI-ing its way around the facility and leaving blood and body parts in its wake.

So it rapidly becomes a game of keep-e-off, with the creature stubbornly hanging on to the oblivious host until forced out into another, before the now smaller group reconvenes the thing-hunt in another room to point fingers and fidget nervously until the same thing happens again.

Having a creature that infests, replicates and lies in wait patiently is indeed scary, and there are sequences that prove that, but it’s like the directors felt that the best part of the 80s film was the gore (it kinda was). By focusing on the gory freak out scenes there isn’t much in time to build tension before the host explodes another inhabited unfortunate in a grotesque display of splayed limbs and distorted features. (Speaking on behalf of the
afore-mentioned sci-fi/horror nerds; points are definitely lost by relying on CGI, part of the ‘beauty’ of the 1982 flick was the gross out effects.)

Ordinarily I would recommend this film due to the cool visuals and the striking effects sequences, but in this case they were all directly lifted from The Thing 1982 and then buffed up with a little (OK a lot) of help from CGI. So while I might tell a newbie that The Thing 2011 is worth your coin, for my money you still can’t go past the John Carpenter’s
version, (which was itself a remake of a 50s film).

Final Rating – 6.5 / 10. While it doesn’t bring much new to the table, The Thing 2011 is a decent imitation of the 80s version, but an imitation nonetheless.