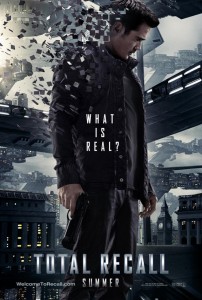 This is Real… ‘e familiar.

It wasn’t too long ago that the escalation of remakes/reboots and the like impelled me to draft what I think should be the definitive set of rules to be considered prior to OK-ing any such project in the future. It was inspired by news of the Spiderman reboot a mere decade after the original, and Fincher’s Girl with the Dragon Tattoo US remake that I loathed so completely.

Unfortunately it seemed that the Total Recall 2012 crew ignored it, because this effort comes straight to us from the ‘Why did they bother?’ files…

Prior to buying a ticket I actually thought about reviewing this film in its own right, with precious little reference to the 1990 original aside from perhaps a link and a one sentence comparison. But when this film is nothing more than a transparent clone of the Arnie goes to Mars modern day classic, that is simply impossible.

So instead I will give two reviews for the price of one. The first a discussion of the new Colin Farrell / Kate Beckinsale release versus the original Arnie film, the second for those who have seen neither film.

For those who have seen 1990’s Total Recall;

The 2012 has Earth a victim of global pollution, with the only two inhabitable regions being the UK and Australia, which has been redubbed the Colony. Space is at a premium, everyone aspires to live in the UK, with the Colony a far less desirable locale. Just like 1788 really. (Learn your history kids.)

None of this really matters to the ‘integrity’ of the film.

Colin Farrell plays Doug Quaid – they didn’t even bother changing the names!- supposed husband to wife Lori (Kate Beckinsale). Doug is an assembly line worker building i-Robot via Halo style robots. He is unhappy with his lot – an astounding revelation given that I just pointed out he is married to Kate Beckinsale! – and decides to visit a memories for sale store for a new perspective.

Not really. The 2012 Len Wiseman edition is for all intents and purposes exactly the same as the 1990 original, with any new elements cribbed from other films anyway. The UK setting is ripped from the design pages of Blade Runner and The Fifth Element, the robots design from I-Robot and Halo.

The dialogue is also for the most part the same, and a hell of a lot less funny and quotable without de accent of Arnie. I found myself muttering ‘Get your ass to Mars’ throughout the film, with a tear rolling down my cheek every time I realised there would be no Mars. No Arnie and no inspiration here.

The best parts of TR 2012 are the same as 1990, only without any spark of originality or surprise. Somehow with all the CGI and technological innovation introduced over the last two decades, I went away thinking that Wiseman didn’t do anything with any of it. Never have I been so underwhelmed by the sight of three large mammaries – not that it happens too frequently unless one woman is on a side angle. The only new bit was introduced thanks to the one bit they didn’t copy, instead making you momentarily think that they did.

The characters are all the same in theory, though Farrell is a poor replacement for Arnie, the one man freakishly disproportionate enough to fit in among the fantastically unrealistic events in such films. In fact the only similarity that Farrell, Schwarzenegger and the fictional Doug Quaid have in common is a proclivity for multiple women…

Of course Kate Beckinsale, on loan from husband/director Len Wiseman and the mediocre Underworld franchise, is a welcome upgrade from Sharon Stone, but as an action heroine let’s just say she makes a great screensaver (except when she’s running)…

Aside from all of the above, they also decided to carefully extract any sense of fun, creativity, kitsch and insanity from proceedings, which begs the question ‘why serious up a premise so blatantly silly in the first place?’ And the fact this version is PG means that there is no profanity, violence or nudity of note.

And now, for those who haven’t yet had the opportunity to see either the 1990 or 2012 version, here is my review;

Buy a 2L Coke. Buy a bag of chips or a bucket of popcorn. Rent the 1990 original. You’ll save yourself probably twenty bucks and numerous feelings of regret.

Also you can watch a better film, have a far more enjoyable experience, wearing only your undies if you choose. And I often do…

Final Rating – 5.5 / 10. I know in 2030 (or perhaps sooner, given this will be mercifully forgotten by November) when yet another reboot is made – probably with Arnie’s half Mexican kid in the lead – that they won’t use the 2012 version as a template.