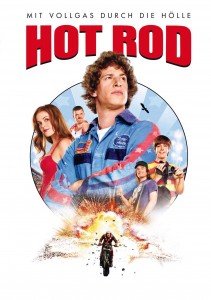 Sometimes foreign posters do it better than the US ones.

Hot Rod is exactly what you expect, a few laughs and some very silly stuff indeed. Rod Kimble (Andy Samberg) is a suburban stunt-guy, which means he attempts poorly conceived feats that put him in peril, with the disastrous results filmed for posterity. Only Rod thinks he is destined for huge thinks – actually most of the idiots that try this stuff probably think the same things.

So I guess so does Rod.

Read the next part fast in one breath.

When Rod learns that he needs $50,000 cash quick, smart in a hurry to save his desperately ill step-dad (Ian McShane) from death so that he can beat said step-dad’s  now healthy butt to earn his long overdue respect he immediately summons his usual crew of stunt-toadies – and the obligatory love interest (Isla Fisher) – to plan and carry off the most amazing stunt in history a motorbike jump over 15 buses.

And that’s it really, Bill Hader thrives as always as the supporting actor that Will Ferrell is meant to be and Danny McBride is unqualified to even aspire to. Isla Fisher is immediately likable as the out of Rod’s league Denise, and Ian McShane hilarious as the gruff and ornery step-dad who refuses to yield to Rod regardless of how ill he is, or how desperately Rod wants it to happen.

A few laughs are found in the fake moustache that Rod dons before every leap – apparently every stuntman worth his salt rocks one – and the deliberately cheesy 80s cock-rock that dominates the soundtrack.

To top all this off some of the stacks are actually quite epic and worthy of going viral on Youtube if they were actually real.

Final Rating – 6.5 / 10. There wasn’t much to Hot Rod in the first place, but I liked most of what ended up onscreen.