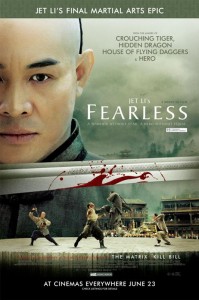 Hint: Poster talks more about other films these guys made…

Fearless got talked up by critics still high off the sumptuous period epic Hero because it was practically marketed as Jet Li’s last kung-fu flick. Apparently this gave him a free kick in reviews, because Fearless is actually pretty contrived and hokey, featuring martial arts scenes that are occasionally great, but too often found lacking.

By 1910 Huo Yuanjia (Jet Li) was the Cee-Lo Green of the martial arts world, pick a style, discipline or weapon and watch him crush you.

But this was not always the case. Fearless follows Huo Yuanjia’s rise from an asthmatic, skinny kid too frail that even his own Father – a dojo master himself – refused to train him, leading to him being mocked and smacked around by other local kids.

But Huo Yanjia wouldn’t let it end there…

I assume Huo worked and trained for years. I say I assume because the editing doesn’t help, without even a short Rocky style montage we meet with him again, now as an adult proficient in martial arts and renowned across the land for his hand to hand prowess. One on One duels seem the order of the era with people mobbing the fighting platforms for a chance to watch their heroes in combat (some of the platforms are so high that spectators couldn’t possibly see anything but whatever). The winner of these bouts either knocks the other man out or off the designated fighting area, and Huo is undefeated.

But winning all the time eventually loses its lustre, Huo indulges a little too much with drinking, spending money. He gets cocky and arrogant, ignoring long time loyal friends, even his wife and 5 year old daughter.

Where Hero, House of Flying Daggers and Crouching Tiger, Hidden Dragon embraced the full on fanciful nature of cinematic kung-fu with battles across rooftops and through forests and combatants leaping over buildings and across bodies of water, Fearless tries for the most part to keep it real, however this means the all too frequent obvious wire work and CGI blood is distracting and frankly often clumsy.

So if your action drama has mundane action, the drama better be top notch right? Well the plot of Fearless has been recycled so many times before that it contains scraps of many other better films, Drunken Master 2 and last year’s Shaolin being obvious comparisons (I know Shaolin was released after – only a comparison). The end result is a film with action that makes you yearn for drama. And vice versa. Hardly a recommendation on both fronts.

Final Rating – 6 / 10. Fearless is not terrible, but it is by no means that minor classic that many have claimed. If Jet Li wants a film for people to remember him by, try Kiss of the Dragon, Fist of Legend or Unleashed.