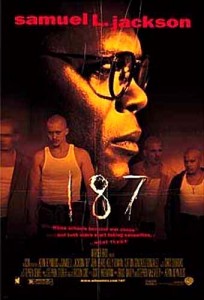 One Eight Seven wants is a serious film that you ultimately just can’t take seriously. I found out after watching it that it was written by a real teacher, given the subject matter perhaps a teacher you wouldn’t want at the front of your kid’s classroom.

Trevor Garfield (Samuel L. Jackson) is a diligent, principled and above all hard working teacher, determined to make a difference in the lives of developing adults. He strives to inspire his students to look beyond the metal detectors and grim realities in their ‘downtown’ New York high school, but apparently not all of his class wants to learn.

When he receives overt – and especially intricate when you think about it – death threats that Garfield takes them to the school authorities, who give him the ‘yeah but whaddya gonna do?’ collective shrug of indifference.

About 45 seconds later Garfield realises that they weren’t just threats.

But even the horrendous injuries suffered can’t kill Garfield’s determination to make a difference to rebellious youth, though they do somewhat change his methods.

It should be no surprise that Garfield’s new class is filled with (25 year old) teens, many menacing, tattooed, well muscled and resistant to authority. In particular a multi racial (black / latino / white) triumvirate of ill discipline who call themselves K.O.S. are
especially unruly in the early stages.

Garfield faces the usual cat and mouse game as he tries in vain to reach some of the class, who I shouldn’t need to point out include the vulnerable smart kid who wants outta tha ghetto,and the unfortunate tough guy who is perhaps misunderstood and wants to be heard,  but despite the mounting evidence that screams ‘give up’ and more importantly ‘you’re gonna get hurt’ he stubbornly moves
onward. This means only two things:

This same premise has been handled many times in many other similar films (The Principal, Dangerous Minds, Stand and Deliver, Lean on Me, Stomp the Yard etc), and at least this film tries a different angle, but while it tries to say something new it is so clumsy and self important at times that the impact is diluted.

The director gets camera happy on more than a few occasions with his placements and angles, but instead of adding to the film’s impact it is actually distracting. A simple conversation at the dinner table turned into a bout of motion sickness as the camera revolved around the couple incessantly. Still, like the film at least they tried something
different, even though it all didn’t pan out.

Given films like this it’s a genuine wonder that anyone grows up wanting to be an educator, especially when the very kids who openly resent their authority threaten lawsuits if a teacher dares face them down.

Final Rating – 6.5 / 10. One Eight Seven shows that not every teacher should try to overcome the insurmountable. At least at the movies.