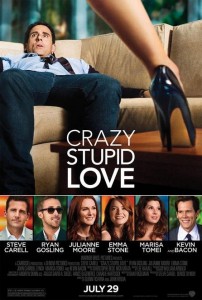 Cal (Steve Carrell) and Emily (Julianne Moore) are a married couple in their mid 40s on date night at a plush restaurant. After perusing the menu for a moment Cal asks his wife of 25 years what she wants, she replies “a divorce”. So the restaurant is not exclusively a la carte then? (I would also ask why date night seemed a good time to break out the news. I mean really, enjoy your meals guys.)

Cal obviously had no inkling of the impending bombshell despite Emily previously admitting to a fling with a work colleague, and he seems to have understandable trouble in processing the news that his last quarter century has abruptly ended. Upon moving out he takes to drinking alone in a plush nightclub, annoying anyone who will listen with all too detailed specifics of the reasons behind his malaise.

Enter Jacob (Ryan Gosling *SWOON*), a younger man who similarly frequents the same club, but a man cut from decidedly different stock. Jacob is everything Cal is not, he is bold, smooth and aggressive, the kind of man women only see in slow motion. The kind of man that seems to command the attention of all eyes in the room. The kind of man that can calmly eat dinner at the bar of the nightclub, wipe his mouth and immediately approach a woman sitting two tables away with the express intent of picking her up. For reasons unknown to anyone but the scriptwriter Jacob pities the older lion and he promises to ‘reawaken the man in you’, cue the lengthy montage where he does just that, and Cal is systematically reinvented from the New Balance sneakers on up.

Now normally that would set the scene in a typical rom-com, with the ingredients in the bowl it would simply be a case of playing out time in the unnecessarily complicated dance of inevitability, with whichever couple is deemed worthy of enjoying the purest form of bliss smoocherooing for the final few seconds before the credits roll.

But Crazy, Stupid Love is a deal more complicated than even that. There are numerous subplots and peripheral characters dancing here simultaneously in and out of proceedings. Among others Cal has a pre-teen son who is an intense fuzzy faced, mop-topped bag of
hormones, a teenaged babysitter struggling with feelings of her own, Emily’s afore-mentioned colleague David (Kevin Bacon) who is hovering vulture style on the carcass of the marriage and other targets and/or conquests that include a spunky law student named Hannah (Emma Stone) and a teacher named Kate (Marisa Tomei).

The proliferation of characters is a strength of the film – the son in particular is hilariously awkward and clumsily blunt – but it also requires a suspension of disbelief larger than more out there films such as Source Code or Limitless. The spoiler-free version acknowledges that a rom-com demands coincidences and twists, otherwise where is the muted suspense to come from? But this film calls for far more than mere coincidence, the karma forces at play here are so very strong that I would suggest the chances of actual occurrence would be the equivalent of winning the national lottery three weeks in a row.

But ultimately this is neither rom nor com, Crazy, Stupid Love has its share of romance (I guess) and is generally amusing without moving too far into either twee or gross-out territory – a line that seems to be getting harder to navigate – and although there are precious few laugh out loud moments on the plus side I never hated myself for sitting there, something I cannot say for shite like Sweet Home Alabama and co. This is
predominantly due to the strength of the leads, Steve Carrell and Julianne Moore are so likable that it seems a shame that their fake movie marriage ended, Emma Stone is rapidly making her name as the down to earth chick that threatens neither male nor female and it would be hard to resent Kevin Bacon even if it was your wife he was hunting.

I let my wife pick one RG pic: I guess it could have been a lot worse.

Which brings me to Ryan Gosling, the current dreamboat for thirty-some women everywhere, nice and non-threatening enough to introduce him to the folks yet ripped enough to leave them weak at the knees.

I actually like the guy (thanks to Drive and a couple late night TV appearances), but I don’t really understand the allure of a softly spoken man who constantly slurs his speech like Gosling does, regardless of how hot the boy is. I’m pretty sure that the drawl thing is a turn on when he’s whispering in your ear, not so much when you’re asking – for the 6th time – why he hasn’t managed to take the bins out even with those great heaving muscles.

I guess that’s the beauty of the rom-com genre, for a couple of hours the normally unlikable becomes likable, the illogical somehow logical and the reprehensible strangely ‘hensible’. Crazy, Stupid Love takes several disparate individuals and has them variously hurting each other in many ways, yet we as an audience can’t help for some if not all of them to get together… in the traditional male/female marital unit sense at least.

While I still haven’t seen The Notebook (and hope I never will) I think Crazy, Stupid Love is a more palatable alternative for guys, and about as bearable as the rom-com genre can dish up.

Final Rating – 7 / 10. I will never watch this film again, but my first viewing didn’t hurt as much as I thought it would.