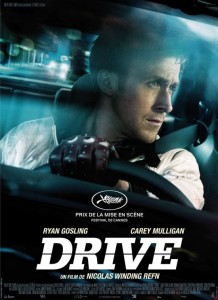 Drive is the best 80s movie released in 2011, and I include the remakes of 80s films Fright Night and Footloose (which I have not and will not ever see). From the cheesy opening titles to the uber-serious pop that dominates the background of several ‘drivin’ and thinkin’’ montages, Drive is an 80s throwback all the way. I’m actually amazed the film didn’t end on a freeze frame high 5 (if that isn’t a special feature on the DVD they missed a golden opportunity).

Hell, even the unnamed Driver (Ryan Gosling) spends the entire film dressed as either the Marlboro Man on his day off or an onlooker at a breakdancing exhibition, with a haircut so sharp it must always be school photo day to him.

‘Driver’ is a bit of a dabbler, he spends part of his time as a Hollywood stunt driver, part as a gun mechanic and part as a ‘no questions asked’ courier, where his only rules are essentially be prompt and don’t keep me waiting.

Driver is an odd type, he seems dispassionate and removed, and operates in a clinical manner. In the getaway that opens the film his car is pursued from the get go, but he doesn’t just blast away 2 Furiously with his pedal to the metal, he nurses his car along until the Need for Speed arises, then Top Guns it until he loses the tail, before promptly vanishing as just another in a crowd.

Driver is ‘managed’ by the enterprising yet slightly pathetic Shannon, a man who openly acknowledges that he is short changing him considering his immense talents, and a man who sees bigger things on the horizon in the form of Nascar racing. But he doesn’t have the funds to start a team, which necessitates the need for a meeting with Small Time Crime figures of Bernie (Albert Brooks playing against type) and Nino (Ron Perlman playing exactly to type). They green light the project and get to constructing a car to be piloted to victory by their protégé, who, like Rain Man is possibly an idiot savant and really is an excellent driver… It was at this point I was sure it would be just another fast racing movie with a mildly retarded guy behind the wheel to root for, like that Sylvester Stallone movie a few years back.

But that all changes – sort of – when he meets a young woman Irene and her 5 year old son Benicio. Irene is a single mum of sorts (as her hubby is in prison) that lives two doors down in Driver’s apartment building, and the two strike up an 80s friendship with the boy Benicio taking a special shine to this new Father figure. When Irene’s husband Standard is released from prison and moves back home the dynamic changes, but never Driver’s expression or demeanour.

It soon comes to light that Standard hasn’t left all of his problems behind him, and fearing for the safety of Irene and Benicio Driver volunteers to help.

There are consequences for all…

Drive is not the best film this year, and despite the undeniable 80s flavour that permeates proceedings it is one of the more original and different films that you will see this year. I can certainly see how it has both struck a chord with critics and conversely why the mainstream have stayed away. Fans of The Notebook (including my wife) won’t find much joy here.

The director Nicolas Winding Refn is a creator of offbeat uncompromising cinema with a decidedly non-mainstream bent, in only the last few years he has made two of the more striking and non-conformist films that I have seen in Bronson and Valhalla Rising. Both were at times difficult to watch but impossible to switch off, and both remained with me for a long time after I saw them.

Drive is slightly more accessible than the aforementioned – with the smouldering Gosling no doubt helping the marketing somewhat – but Refn has become notorious for the violence in his films and while this film starts a little sedately he certainly indulges himself more than a few times in the second half of the film, leading to my wife watching as much of my armpit as she did the film for a while.

I can’t recommend Drive to everyone, the violence is too sudden and realistic for many and the pace too deliberate and unexciting for others, however I think fans of modern era David Cronenberg will find much to admire with this film. While I can appreciate the ferocious originality and vision of Bronson and Valhalla Rising I think Drive represents a decent compromise for director Refn, if he decides to work this niche for a few more films I will definitely go along for the journey.

Final Rating – 7.5 / 10. Not always easy to watch but certainly one of the more singularly powerful films of the decade so far.