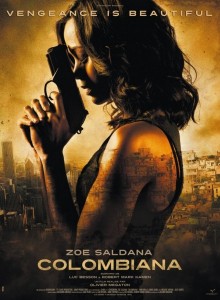 When Luc Besson hit upon the idea of a small child seeking vengeance after witnessing the murder of her parents he managed to craft it into one of the most intelligent and memorable action movies of all time, simultaneously launching the career of one Natalie Portman and ensuring Jean Reno will forever remain cool in the eyes of film geeks.

That film was Leon: The Professional. With Colombiana Besson takes the same basic premise but has decided to let the young child develop and hone her skills for a few more years before embarking on her mission. Unfortunately Besson only wrote this film, because in the right hands this might’ve turned out OK, ultimately though what the audience gets is 90 minutes of a director eye-humping Zoe Saldana so blatantly that I swear I could hear a panting noise emanating from behind the camera.

Saldana is the adult version of Cataleya, who at the tender age of 9 saw her parents killed by a bad, bad man in Colombia. Young Cataleya uses her smarts, physical skills and moxie to escape the hit, managing to flee to America where she immediately tells her savior Emilio ‘I want to be a killer’. The early scenes are actually quite effective and the young girl who plays Cataleya imbues the character with a lot of spunk and personality…

As The Incredible Hulk showed a few years ago, South American cities are quite photogenic, as the director shows for the next hour and a half, so is Zoe Saldana. 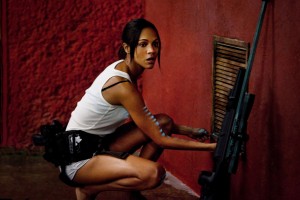 “Well what would YOU wear to the shootout?”

Without even the practically mandatory training and progressing montage, Cataleya suddenly emerges in the form of Saldana, and all spunk, personality and empathy is gone, replaced by intensity, determination and a costume budget that couldn’t have exceeded $29.99 for the entire film.

We learn that adult Cataleya has now been an assassin for some time already, with over 20 kills. She continues to rely on Emilio, the man who initially sheltered her as a young girl, but now more for sourcing new ‘jobs’. Cataleya and Emilio share a father/daughter dynamic that is held at bay slightly by Cataleya’s steely eyed lack of emotion and the limitations of a clumsy script.

Cataleya lives by herself and doesn’t allow anything other than the most mandatory human interactions, her male friend Danny is less a boyfriend than a fuck-buddy, with Cataleya departing immediately after the ‘business’ is completed. (My wife asked at this point “well if she doesn’t talk to anyone how did she manage to land that guy?”… ummm take a quick look at her, Zoe Saldana probably doesn’t need elaborate pick up lines…)

We get to accompany the lithe and extremely adept Cataleya on a couple of missions that are ‘Mission Impossible’ intricate and convoluted, though without any sense of fun or knowing winks to the audience as to just how ludicrous these things are.

After every kill she always leaves the same calling card on her victims, a picture of a flower for reasons that are known only to her. The FBI and cops are baffled, their only certainty is that this prolific assassin is a guy, for reasons that are never really mentioned. Even after watching security camera footage that seemed to suggest a woman might be behind the hit the lead FBI guy states bluntly “We’re not looking for a woman”. Yeah, you’re looking for a guy who loves drawing flowers, maintain the search gents.

After these missions that serve no purpose to the plot aside from showing us Saldana in her bra, panties and figure hugging attire repeatedly the film finally gets to the point, but not without a lot of effort. There are no less than 5 dumb coincidences required in a 10 minute span to suddenly bring Cataleya into the open – each more ridiculous and unlikely than the last – and should I even point out that when her pursuers arrive she has just stepped out of the shower and has to flee the scene in her white bra and panties combo?

The finale demands that the catsuits and subtlety go out the door, and the once careful and calculated Cataleya changes into a half Rambo / half Tony Montana figure, only without action of the former or the over the top personality of the latter. Had the film been of any more than perv interest at this point it would have lost me, unfortunately this wasn’t the case, as the film had lost me almost an hour earlier.

Final Rating – 6 / 10. Colombiana takes the elements from The Professional and then removes all that made it interesting. What remains is simply proof that Zoe Saldana looks enticing in her undies, and we already knew that. (Probably won’t stop some guys reconfirming the fact using freezeframe once this arrives on Blu-Ray though.)

P.S. Is there any way that we can inform Hollywood that the form of environment defying gymnastics known as parkour is now officially The Matrix freeze and rotate of the last decade? Sure it looked cool the first half dozen times, but we’re all sick to death of it now.