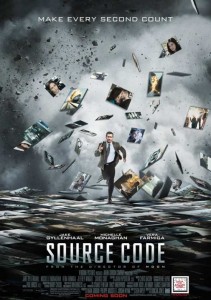 And I thought I was bad at photoshop…

The tale of a man named Captain Colter Stevens (Jake Gyllenhall) who awakens on a train that he can’t recall boarding across from a stranger who obviously feels she knows him and swiftly learns that he is not even in his own body has definite parallels to both films, and while it is definitely worth a look it ends up as a lesser film than both.

The central premise of Source Code is that the human mind can recall with great detail the final moments of life – in this case the final 8 minutes. Ambitious scientist Dr Rutledge (Jeffrey Wright) has discovered a method of jacking into the brain of a bystander and having a military man play through the closing minutes to see if they can funnel key information back to headquarters, information that might assist in learning about the circumstances behind the event, perhaps even something that might prevent future incidents.

In this case Stevens is inhabiting Shaun, a teacher aboard the morning train to Chicago, a train that also carries an explosive device that will kill thousands of innocent passengers in 8 minutes time. At the point of explosion Stevens has his consciousness sent back to an undisclosed location where his only contact is a female soldier named Goodwin (Vera Farmiga) who he interacts with via a monitor. In the initial stages Stevens is quite literally in the dark, confused and disoriented, each time he is urged to go further and try new things, but Goodwin and ultimately Rutledge seem reluctant to stray from the briefest of scripts, something that frustrates Stevens no end. Then it is back to the train for 8 more minutes of trying to ascertain exactly what went on and to prevent another more serious attack on Chicago itself.

This is where the Groundhog Day scenario kicks in, though with 8 minutes instead of 24 hours. Stevens learns quickly that only his actions can differ from what actually happened, so it is like he is in a carefully scripted play where he is the only one allowed to improve. Shaun’s travelling companion is a young colleague named Christina (Michelle Monaghan), and the carriage they are riding in has a group of passengers that over the many run throughs Stevens learns more and more about. Seeing as at the end of each 8 minutes the entire train-load dies Stevens rapidly learns that there needn’t be any reluctance to interrupt, annoy and even beat down the passengers if it helps enlighten him – they’re gonna die every time anyway – but this is where the minor flaw in the film happens for me.

Stevens makes what I feel are some boneheaded decisions repeatedly in his many runthroughs, then in subsequent situations knowing full well he is on the clock he loafs through the early minutes, wasting precious time, before charging headlong into flawed assumptions and illogical deductions. I realise that in a 90 minute film about one 8 minute scenario that perhaps they felt they had to pad out the running time somewhat but I couldn’t help but roll my eyes at some of the dumb things this supposedly highly trained helicopter pilot was doing.

That aside however flawed I found the actions at times Source Code has a pretty solid premise that again is not too dissimilar from Deja Vu, which itself had vast holes in logic that required ignoring in order to enjoy the film more. That is the case here. If you think too hard about Source Code it is patently obvious that the whole thing makes precious little sense, but neither does Star Wars, The Matrix and dozens of other universally lauded films. Source Code is not ever going to threaten their position as a hot topic on various message boards but it is worth a look and in the early stages while you are attempting to piece together what is going on alongside Captain Stevens it is quite captivating.

I think the acting is a mixed bag, Farmiga is OK as Goodwin but reminds me too much of Kristen Wiig, who I find annoying. Wright channels Darth Vader with his speech patterns and deeper than usual tone and Monaghan is fine in a role that basically requires her to be puzzled for at least 6 minutes out of 8 as her train buddy acts in ways that she has never seen before. But obviously this is Gyllenhaal’s gig, and I guess he is fine. I don’t think he quite cracks the ‘leading man / hero’ ranks just yet though, but in a smaller budget film like this I’ll give him a pass mark. He’s definitely far more likable – or is it less hittable? – than Shia LeBeouf.

One last thing. In the dozen or so runthroughs where the early goings were exactly the same routine the ticket lady always asks ‘Shaun’ for his ticket, yet never Christina. Strange…

Final Rating – 7.5 / 10. Sure the story doesn’t hold up to close scrutiny. But I’d rather watch this implausible creativity over a million lazy remakes and sequels. (Scream 4 anyone???)