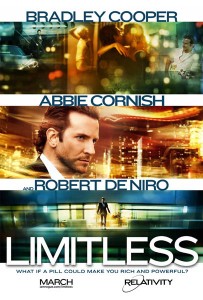 Even the most brilliant and open minded among us can only utilise 20% of our brain’s capacity – which explains the continued box-office success of Zack Snyder movies like Sucker Punch. When an author battling crippling writer’s block named Eddie (Bradley Cooper) is introduced to an experimental drug called NZT which unlocks the remaining 80-odd he immediately begins operating at a Stephen hawking like level of intelligence, only with the networking skills of a sports commentator and the sense of omnipotence of a young Kanye West. 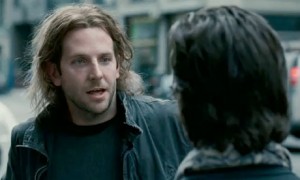 Apparently not yet smart enough to realise he needs a haircut.

Cooper is dressed down to highlight just how ordinary he is (and still comes across as a solid 8.5 to my wife). In the early goings it is made clear that while he is a smart man, in the words of dozens of my report cards ‘he could do better if he wasn’t so easily distracted’. His book deal is in place but is in peril due to his inability to even begin putting his ideas on paper, and this lack of mental traction has caused his ex-girlfriend Lindy (Abbie Cornish) to give up on him. Once NZT falls into his hands and more importantly his bloodstream he straightens up and flies straight instantly. The confusing is child’s play to Eddie and he is able to logically work towards solutions at a last 5 minutes of a CSI episode level.

Only All the Time!

In the days and weeks following Eddie uses his newfound powers as we all would, to gain unfair advantage and to tag unsuspecting women, most notably getting Lindy back thanks to his new get up and go attitude. He is able to master foreign languages and complicated problems in quick time, becoming a go-getting, all answering master of logic. And the guy you want to be around and have on your side.

After he works his magic on the stock market and using loan shark money he turns a mere 5 figures into millions in a precious few days Eddie brings the attention of the media, which in turn brings him onto the radar of a Bill Gates via Trump type named Van Loon (Robert De Niro, low key for a change).

Unfortunately Eddie’s newfound renown and success bring the more nefarious attention of the opportunistic, the greasy loan shark knows something is up and it seems Eddie is being constantly followed. Upon wowing Van Loon with his first meeting he starts upping the dose to remain on top, hires a crack security team to protect him and sets researchers on the trail of replicating what is becoming a diminishing supply of smart pills, pills that seem to have unforseen negative implications to offset their obvious pluses.

Limitless might not be all that great but for a wide release film it sure is ambitious and different, something that can’t honestly be said that often lately. Cooper navigates the tenuous tightrope of believability reasonably well and Abbie Cornish is already forging a solid career of her own as a credible supporting actor.

After the premise is established and the major characters revealed Limitless loses its way somewhat in the middle section and contains a sequence that could best be described as bafflingly ridiculous. This is partially redeemed by a solid final third with a couple of notable sequences, the more memorable being Eddie’s unsavoury thirst for knowledge…

Final Rating – 7.5 / 10. In the film Eddie faces the choice between remaining ever-ordinary or being momentarily awesome! The film itself might not reach those spectacular heights but at least it had a crack at glory rather than settling for the usual mediocrity.