Land of the Lost (Review) 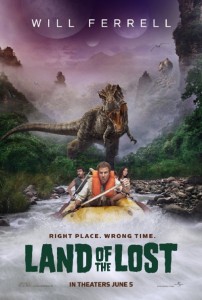 Please turn around Will and do the world a big favour.

I have a toddler at home that will be three later this year, and I can’t wait for him to get a year or two older so I can start sitting with him through a heap of kid’s movies that I love, like most of the Pixar bunch, Ice Age and older Disney stuff… And so I can warn him about absolute pus like Land of the Lost (LOTL from here to save me wasting more precious seconds on this sweaty scrotum sack of a film).

Prior to today I would have said he worst film I have seen this year is The Spirit, and while it was exceptionally terrible at least it tried but failed dismally. In fact it was so bad that it thought it would be a long while before I suffered through something so crapulent again, let alone something perhaps worse.

Last night I thought “Why stay home?” and drove the 4 kilometres to my local cinema and forked over the $10 cinema member special for a ticket to see Will Ferrell’s latest classic Land of the Lost.

We have a new contender folks!

Land of the Lost is the worst kind of bad. It. Doesn’t. Even. Try.

I watched a news story recently that said buying pirated DVDs indirectly finances and therefore supports terrorism, I would argue that paying to watch LOTL or worse buying the DVD supports deliberately lazy film-making. I can’t think which is worse.

Let me get some of the many negatives out of the way first before I really get into why this film sucks so hard, LOTL is the cheapest-looking expensive film I have seen in years.

Matt Lauer, who (as an Australian) I’ve seen primarily through US talk shows like Jay Leno and Conan O’Brien, is in it simply to add supposed credibility as a “serious” newsman, but he probably has hurt his career more by appearing in this (in many other films, especially animated, the Matt Lauer role is played by Jay Leno).

Plenty of bawdy PG 13 innuendo and veiled pseudo-sexual humour, probably too much for a parent explaining “why that happened” to a pre-teen.

Will Ferrell hasn’t tried to be funny in a movie since Zoolander or perhaps Jay & Silent Bob Strike Back and he certainly isn’t funny here. My theory behind that is that Will is only amusing in small doses, as in afore-mentioned films he played a support characters, since he became “big” I haven’t enjoyed anything that he was in, especially this.

This movie has the most embarrassing and forced “this is funny” song and dance sequences that I can remember.

In LOTL he is Dr Rick Marshall, a scientist with the theory that “Quantum Paleantology” dealing primarily in time warps, is the answer to the world’s problems, of course he is laughed off-stage when he appears alongside the sceptical Matt Lauer.

Cut to three years later, Marshall is now just a teacher, though still espousing his theories, when a young woman named Holly appears claiming to have evidence that his theories are correct.

Marshall and Holly go to a local hot spot to see if the theory holds water where they meet Will (Danny McBride), who tried to steal the movie as the carny-style tour guide but will regret it in the long run. Of course things go wrong and blabba-da-bloowey they end up in LOTL, and the so-called fun begins.

So from here on in they spend the time in the LOTL, being chased by a T-Rex, lizard creatures and random bugs, one of which provides the only genuine laugh in the film, albeit CGI enhanced. Their only friend is Cha-ka, a monkey-man type creature who only Holly can understand, as she has done some language courses or something. This leads to the always hilarious mistranslations, such as those that benefitted Red Dwarf for so many years and every Rush Hour film.

Enter the elaborate but obvious sets and CGI effects, which again look like they cost some bucks, but still look fake as hell. Where I can’t give an excuse are the costumes, surely they MUST be deliberately cheesy and cheap looking, if not everyone involved should be ashamed. I’ve never seen such “skinny guy in a suit” crap since the Greatest American Hero.

Without describing the final ten odd minutes (see my final rating for an apt summary) the finale is some of the lousiest, laziest, unashamedly bad rubbish ever made. I doubt that they had more than one take on any one scene, and thought for more than 5 minutes on any part of the scene. Suffice to say I feel the scene sucked balls, and should be shameful to all involved, though strangely I think Will Ferrell won’t care as he lazes by his Olympic size pool next to a mansion that was previously owned by Madonna or P-Diddy.

But it can’t be all bad can it? What did I like about LOTL?

– By stating that all time eras and regions merge in the LOTL, the audience can’t say “oh that couldn’t happen”, or “that wasn’t around at that stage”.

– At least there were no annoying, supposed to be cute kids, a la’ Jurassic park or Journey to the Centre of the Earth.

Final rating – 4 / 10. I was bored shitless by the first 80 minutes, but that was pleasure when compared with the last 10+ minutes of uncut, unadulterated PURE ASS!!