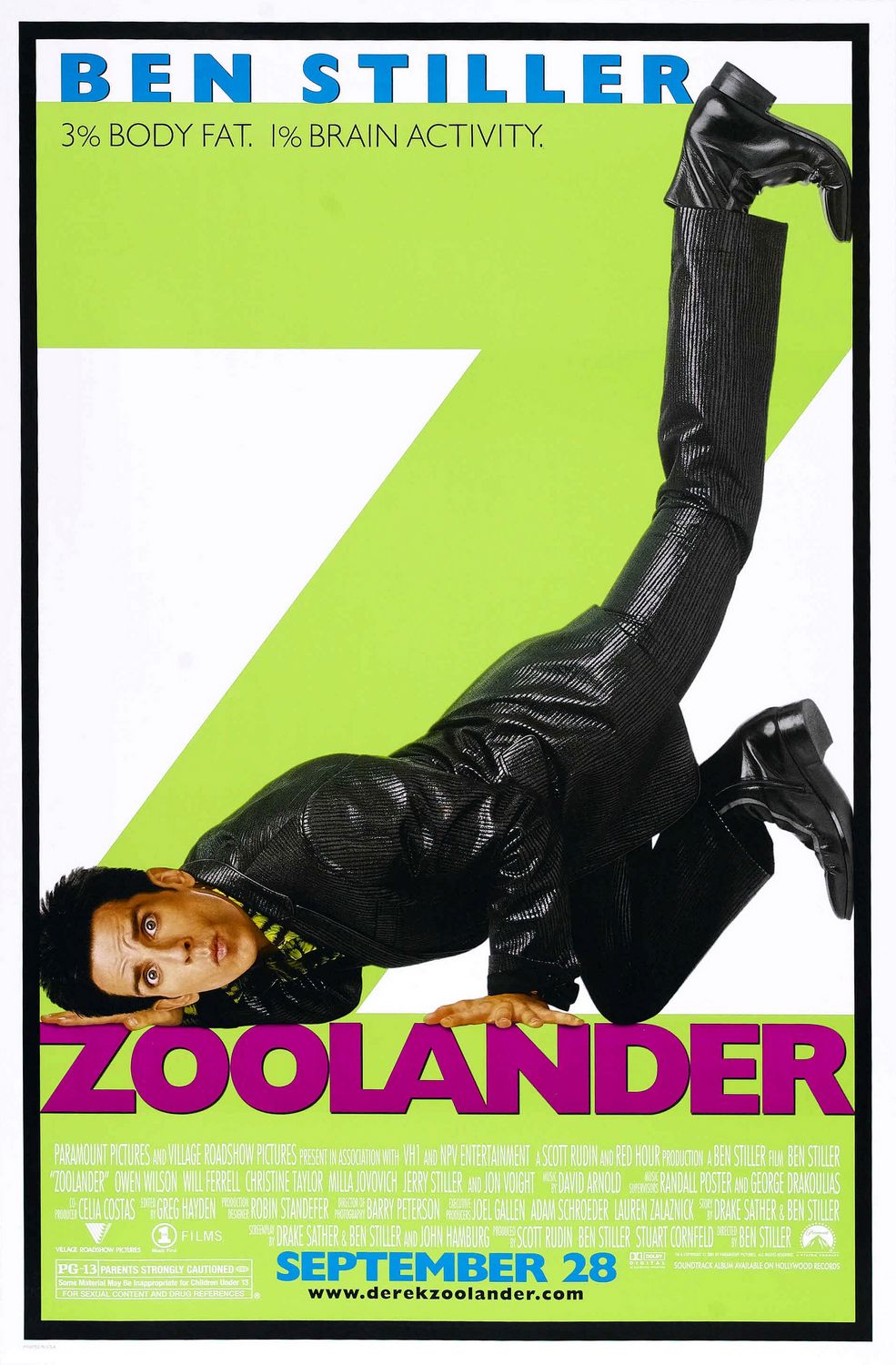 Ben, please make another Zoolander instead of 27 more Fockers crapfests!

When he is in stuff like Meet the Parents, Along came Polly and 53 other shitty movies I can’t run away fast enough, and his voice “acting” in the Madgascar films is among the laziest and worst ever. But then he comes up with something like Tropic Thunder, which was hardly brilliant but was funny and pretty clever, and thanks to Zoolander he will always at the least have one Great movie on his resume.

Zoolander should really be a one joke movie, along the lines of almost every Will Ferrell movie made in the last decade (Talladega, Blades of Glory, Semi-Pro, Stepbrothers etc), but it is pulled off so well, and is so continually funny that it manages to avoid that altogether. Strange that the best anti-Ferrell comedy film made actually has him in it!

The first two minutes of the film basically tell us the entire plot, and give us an idea of just how silly this whole thing might be:

The fashion industry has banded together to discuss what can be done when the Prime Minister of Malaysia starts closing down the sweatshops which allow them to make their clothes at such a ridiculous profit. They decide to brainwash someone to assassinate  the Malaysian leader when he appears at a fashion show.

That someone of course is always going to be Zoolander. Derek Zoolander more specifically, a two minute promo character created by Ben Stiller to get some chuckles at a fashion awards show that he parlayed into a 90 minute classic comedy.

The best part of Zoolander is the fact that Stiller not only gets a myriad of real life celebs to appear in the film (30+ stars are listed as Him/Herself in the credits), he manages to get most of them to agree to pull piss out of themselves, Fabio, Lenny Kravitz, David Bowie and many others that you would assume would never do anything to rock their carefully constructed image allow Stiller to make them look like dicks, especially Fabio.

The characters are constantly attired in ridiculous impractical outfits that no-one ever wears, speak in outlandishly stupid and arrogant ways, and carry the latest in useless accessories at all times.

This is a comedy, so the plot is basically something to hang jokes onto, but in short Zoolander has been the hottest kid on the block for a while, but he is danger of being a punchline thanks to a scathing article written about him in Time magazine, an awards show brainfart and a freak fuel pump fight gone wrong that ends with the death of his peers and housemates.

Talk about recycling of a premise!

After a brief trip home to coal mining country which basically proves that he doesn’t belong, Zoolander heads back to the promise of a headline act in a forthcoming fashion line show. Of course the show is run by the designer Mugatu for the explicit purpose of allowing the Malaysian PM to be offed.

The brainwashing scene in which Zoolander is shown a loop of Mugatu spouting stupid dialogue and orders  is memorable, there is a “walk-off” between Zoolander and his primary rival Hansel, who I will get to shortly emceed by David Bowie, and the laying low scene in Hansel’s crib is hilarious.

Now, Owen Wilson plays Hansel, a totally bohemian male model who calls people “brah” and has a personal posse of ridiculous characters including a shamen, some midgets and a Buddhist guy. He sounds like a redneck, spouts gibberish that makes him sound like a tosser, and carries himself with a sense of  underserved self-confidence that borders on insane. And fuck is he the funniest thing in this film by a mile!

For some reason everything Hansel says cracks me up, it is truly a shame that he really only gets truly involved in the film in the last third, I saw recently that Stiller is finally dusting off Zoolander for another film, I can only hope Wilson agrees to sign on, because he has been in as much crap as Stiller since this.

I must also give (partial) credit to Will Ferrell as Mugatu, he is quite funny here, but it is because the role requires him to be cartoony that it works, and because they limit his screentime. For example, where Ferrell is given a whole film to ham it up, Anchorman, Talladega Nights etc I tire quickly and by the end of the film I remember why I hate him. In Jay and Silent Bob Strike Back, this film and to a lesser extent Old School by paring back his screentime he can be more acceptable, even tolerable.

Zoolander is a clever comedy about being dumb in an industry where stupidity is a prerequisite, it is funny and vacuous in equal proportion, and simultaneously celebrates celebrity while showing how ridiculous it all is.

Final Rating – 9 / 10. Highly rewatchable, light and hilarious. It is frustrating that Stiller can write and direct this, then chooses to appear in Along came Polly with seemingly no remorse.