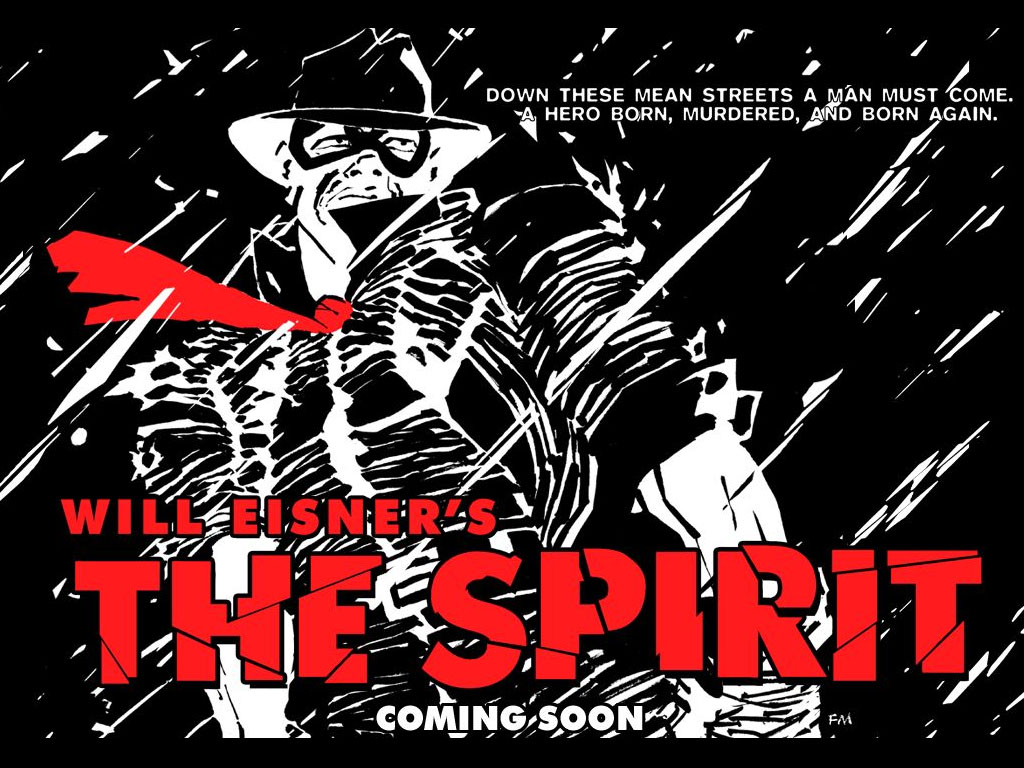 Every few years an unheralded, usually low budget movie comes along that is deemed “cool” by those in the know, and eventually these films make big bucks and occasionally a career is born or revived. I’m obviously referring to Pulp Fiction, which resurrected the careers of John Travolta (bad) and Bruce Willis (good), while ensuring that Christopher Walken will endlessly be quoted, Ving Rhames will forever be deemed cool and that everyone knows what garcon means .

To a lesser extent Sin City did a similar thing a few years ago, using green screen and graphic novel techniques to make a cool movie that isn’t quite as cool as it thinks it is. As Hollywood tends to do, when one flick is successful they piggyback an idea to death (Anaconda, / Armageddon, Deep Impact, Volcano). That brings us to:

I’ll put it this way, I watched The Spirit last week, about 4 days later came to write some stuff and realised I had forgotten that I had ever seen the movie. IN 4 DAYS! If that doesn’t come off as a negative recommendation I don’t know what will. This is the sort of movie that Christopher Nolan and Guillermo Del Toro must have watched before they said “We must be able to do better than that.” In fact, it’s the sort of movie that puts people off “comic book” films.

The plot, such as it is, is that the superhero with the gayest name in history, “The Spirit” goes up against his nemesis The Octopus, Sammy Jackson, with his ex (when they were teens) Eva Mendes.

First the good things about this movie.

Actually that’s it, it looks cool. It really does. So I guess if that is enough for you to decide to watch the film despite everything I’m about to say all I can hope is that you enjoy your Jessica Simpson albums.

Now rather than go on and on about the movie’s flaws I will highlight them in bullet fashion:

– The plot adds nothing to the movie, there is an inexplicable scene where they all in Japanese garb that is totally pointless. The Spirit has to narrate certain sections as otherwise we would have no clue what is going on, but even then sometimes he is speaking to himself and other times he isn’t. One scene exists simply to have Eva Mendes photocopy her arse, which the Spirit recognises after 10 years! (I think this was supposed to be “sexy”.)

–  The characters are just lame, the Spirit talks like Paul Rudd and acts like Casper Van Dien (unfortunately with half the personality), the Octopus is a total cartoon who comes across as neither amusing nor menacing, Eva has a boring character and if Scarlett Johanssen is the young actress of her generation it is a pretty threadbare generation, as she monotones her way through some atrocious dialogue, including calling other characters both “doorknobs” and “farts”. The less said about the “Beagle Boy” henchman the better, they flat out suck.

– Even though as above they admittedly have little to work with the characters really phone in their performances. I love Sammy Jax but he really read his own press before he agreed to this one, “If I yell every 5th line, purse my lips and boggle my eyes every now and then this’ll be a classic!” Bad acting all round really.

– Frank Miller is apparently a genius graphic novel guy but he ain’t no director. He retains the same artist’s eye for a cool visual as per Sin City, but everything else is just clumsy and amateurish, and if he really has some classic creations of his own why would he decide to butcher someone else’s work? (In this case some guy name Will Eisner. I don’t read comics.)

In summary, this Sin City lite rubbish actually sets back the green screen style of film and the comic book movie in general. Previously my least favourite movie based upon a comic book was DareDevil.

Ladies and gentlemen, we have a new low.