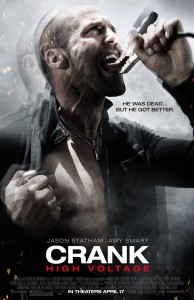 I liked Crank despite myself. It was stupidly and unrealistically violent, ridiculously profane, surreal, obviously stylised, throwaway disposable and trashy…

Every minute had the characters winking at the camera saying “can you believe they green-lit this shit?” as Jason Statham, playing Chev Chelios had the Speed-ish task of making sure he kept his heartbeat at an extremely high level to make sure she didn’t blow, for 80 odd hectic minutes.

Now I’ve watched the sequel Crank – High Voltage, so I can say if they ever make another sequel to this, (and I wouldn’t be upset if they do), I reeeeally want to be in the pitch meeting.

I can only imagine how it would go down, a group of writers would be briefed with the following aim: Come up with the most ridiculous sounding over the top crap that you can possibly think of, and we’ll rule out only the most ludicrous when the time comes to finalise the script.

These are some suggestions that would likely arise from such a pitch:

“OK, so Chev wakes up without a heart, and it was replaced with some sort of machine that could only be kept going by jolts of electricity.”

“Chev, while whistling the background music, jams a shotgun up a guy’s arse and threatens to pull the trigger unless he gets the info he needs.”

“Chev repeatedly has to purposefully electrocute himself to keep his heart going.”

“During a gun fight in a strip club a stripper’s tits are shot and deflate to flapjacks.”

“Someone has full body tourettes? Is that even possible?”

“There is an identical tranny twin to the tranny in the first film who wants revenge?”

“Chev runs into his ex-missus and bangs her on… I dunno… a racetrack? And people cheer the whole time?”

“There’s a Godzilla vs Mothra showdown where both guys where rubber suits and fight among scale buildings?”

“A flashback to a Maury-style show featuring a young misguided Chev?”

I ran out of italics and underlines when initially putting together the above list, suffice to say there is a lot of freaky, stupid ideas there. Each one freakier and stupider than the last….

Yet none of them would get in.

Because they are ALL in Crank – High Voltage.

And I didn’t even mention the bodyless guy, Bai Ling as one of the more indecipherable and indescribeable characters in movie history, and the fact that Jason Statham is basically a well muscled cartoon throughout.

Crank – High Voltage deals with Chev’s attempts to track down his missing heart that has been poached to be given to a 100+ year old Triad leader named Poon Dong, but you really didn’t need to know that. If you read the bits above and are still this far in without rolling your eyes so far that you are looking backwards then this is the 90 minute time waster for you. It never for a second takes itself too seriously, is confusing enough that you give up even trying to follow anything but the essential plot, Chev needs Heart back, and has too many ludicrous events that it is hard to single out one.

Final rating – 7.5 / 10. Disposable and trashy as hell. But dammit it is constantly eyebrow raising and has so many “Can you believe that shit?” moments that at the least you will never be bored, as long as you promise not to take it seriously for more than one second.