The Man Who Wasn’t There (Review) 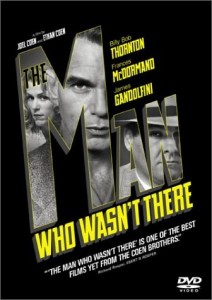 I watched Burn After Reading a few months back, and hated it…

A month or two later I thought about all the Coen films I liked and thought I must have gotten it wrong, so when my Mum came up and stayed for a couple nights I rented it again and we watched it…

…and she hated it…

…And she likes almost anything that doesn’t have disembowelments and 77 f-words. I then realised even the infallible can be fallible.

So it was a redemption mission to the video shop to track down a Coen Brother’s flick with which I would rebuild the confidence created by The Big Lebowski, Blood Simple and Miller’s Crossing.

Thanks to Rottentomatoes I knew that The Man Who Wasn’t There slipped through the cracks and was well received critically, so I tracked it down. While this is not necessarily Strike 2 it just wasn’t that good a film in my view, sure it was probably magnificently directed and filmed and blah, blah, blah, but the story was too simple and the tone was too dispassionate for me to care how things turned out.

Billy Bob Thornton is Ed, a local barber who works for his brother-in-law. Ed is low key, has a croaky monotone drawl(when he speaks) and is constantly smoking. He doesn’t engage in small talk with clients or even his brother in law, and if he wasn’t the narrator of the film he would hardly talk at all.

Ed is married to and lives with Doris (Coen staple Frances McDormand). I say lives with as they are hardly on “husband and wife” terms much of the time.

So this Italian walks into a barber’s shop… and there is no punchline, but he does yak about an opportunity that he feels will create a shitload of cash for anyone in at the ground floor, all he needs is an investor to help him get the thing off the ground. Ed thinks and decides cuttin’ heads isn’t his long term path, so he blackmails Doris’ boss Dave, who he is reasonably confident is banging Doris on the sly.

Wafting in and out of the film are a bunch of quality character actors, many of which I have seen in Coen Brother’s films before, a newcomer is Scarlett Johansson, still in her teens at this time who plays a role simply to fill a few minutes and provide plot possibilities. But it is Tony Shalhoub from Monk who steals the show as a slick big-city fast talking lawyer, he keeps the plot moving and provides almost the only character in the film with a pulse.

I mentioned above that the tone was dispassionate, and Ed is the prime example, his boring existence is falling down around him and he simply takes another drag of his ciggie and thinks to himself a bit more. Everyone is just so bored and drab, and if they try to be otherwise like the Italian venture capitalist or Doris when drunk, they come off as cartoony. I figured after a while that if Ed didn’t seem to give a shit about all the problems that faced him I would follow suit, unfortunately near the end of the end of the film when things start getting twistier and a little more terminal for some both myself and Ed still maintained our apathetic position.

In fact just when I thought things must be getting close to a crescendo the credits rolled and I realised that I sorta zoned out for the last five minutes of the film. Now I wasn’t sleepy, just too bored to care, I even rewound the last 5 and watched it carefull, only to realise that the Coen’s were perhaps their own biggest enemies. Between Miller’s Crossing, Blood Simple and even Fargo I’m a little twisted out, I know going in that even the good guys are a chance of losing and that nothing will go well even when it should, there won’t be any stunts or explosions (which is fine) and the dialogue will be very dry and understated. This is great from time to time but when the plot is familiar yet lacking, and nothing happens worth following… who cares?

I’m far from writing off the Coens, but I would hope that they come up with a better story for their next flick, they have always toed the line expertly staying the right side of the dreaded “quirky” label, this film went a little too close, (Burn After Reading vomited all over the line).

Final Rating – 6 / 10. I’m sure that this is very technically proficient, and the black and white photography is excellent, I just didn’t care enough about the characters to remain involved in the story to the death.