Originally pegged as a Sylvester Stallone action vehicle, the success of 48 Hours saw the producers of Beverly Hills Cop decide to give an up and coming Eddie Murphy a try, the results are a unique synergy of character and actor that meld to create one of the most memorable cinema characters in history.

The tale of a loud mouthed and cocky Detroit cop being thrust into the pretty and proper world of largely crime free upper crust California might seem a little formulaic, but Murphy’s swagger, and some savvy moves made it work, and propelled Eddie Murphy into the big-time instantly.

In fact if you take a good look at the solid foundation that underpinned this fish out of water story, you might be forgiven for wondering if this was all an amazing coincidence or simply one of the most cleverly crafted films of the 80s. 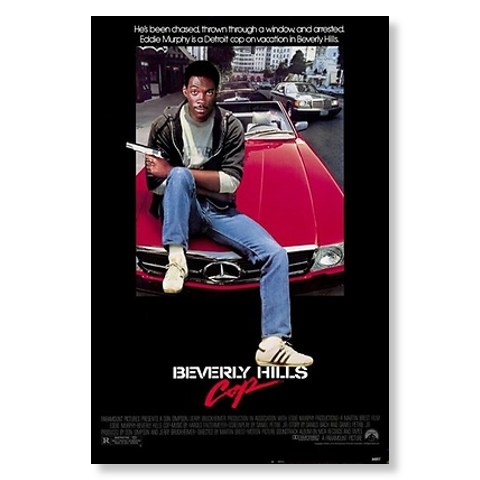 Murphy’s star was rising with 48 Hours and Delirious, he was still very young, unbelievably self-confident and effortlessly funny, with the added benefit of not having all his jokes, voices and THAT laugh heard repeatedly, it was all very fresh.

The director Martin Brest might not have made many films but he had a knack for making action sequences more visceral without big effects and explosions, equally as important Brest had an ear for solid tunes to accompany said action. The opening road train chase and the string of stunts that open the film attest to that.

As trite as it might seem putting a brash young black guy in among a bunch of stiff shirt by-the-book cops works, especially when the black guy is Eddie Murphy at the height of his comedic powers and the stiff white guys always remember to look suitably shocked and appalled (something they just forgot to do with BHC3, where’s the fun in being mildly obnoxious if no-one is there to be offended?).

The original Beverly Hills Cop boasts a soundtrack that can lay claim to being one of the strongest in living memory – with a few songs that still hold up almost 3 decades later – and an immediately catchy and timeless theme song entitled Axel F.

Even the cops are perfect for the film, Rosewood is the keen young pup who admires Axel even though he knows he could never be him, Taggert is the wizened vet who thinks he’s seen it all and can’t wait for Foley to trip and fall on his face, and Bogomil is the department head who just doesn’t want it to happen on his watch.

Unlike the earlier Murphy vehicle Trading Places (so-so) Beverly Hills Cop remains rooted in reality as Axel and the initially reluctant Beverly Hills Police officers ordered to accompany him on his many jaunts, Taggert and Rosewood, swear, shoot and bullshit their way across the city in search of Axel’s buddies’ killer(s).

Beverly Hills Cop is a perfect blend of action, comedy and story that sadly seems so hard to replicate today. They could try to remake this a hundred times and not make anything near as good. 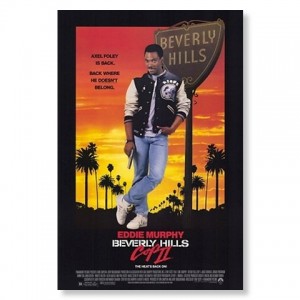 After the original hit so big in 84 it was inevitable (and to a 14 year old like me) quite welcome that a sequel would be cobbled together. The surprising part of it all is that this film is almost as good as the first, and despite being panned mercilessly by many it remains one of my favourite guilty pleasures from the 80s. In fact I probably know this film better than the original.

Axel Foley is once again drawn back to Beverly Hills from his cosy, dangerous rut in Detroit – much to his superior Detective Todd’s chagrin. This time he is there to uncover just who is responsible for Lt Bogomil being gunned down there. (One photo of a fishing trip is enough to inform us that between the first and second film the Beverly Hills Police crew and Axel have become fast friends.)

The mechanics of the sequel demand that it be more elaborate, so this time Axel, Taggert and Rosewood find themselves on the trail of the Alphabet criminals, so called for leaving clues in the form of letters and performing their crimes alphabetically – wonder how they would have gone if they made it to ‘Q’?

With the characters already introduced and by this stage well-defined, all that is left is to get into it. The sequel has a soundtrack that is almost as good as the original, action sequences that hurtle along almost as well, and better criminal big wigs in the form of Jurgen Prochnow and unfathomably tall and blond Bridget Neilson.

It seems to me that the first two Beveryly Hills Cop films were taken very seriously by the filmmakers, with no Martin Brest at the helm a savvy move was made to put Tony Scott behind the wheel, a man that can make reading the phone book more adrenalising and somehow exciting.

The last 45 minutes of BHC2 is in fact almost one long unbroken action sequence, with chase scene after chase scene, most only broken up to pause while Axel breaks out another character voice to bluff his way into or out of trouble.

The pacing of the sequel is probably better than the original, thanks again to the fact that Scott didn’t need to bother us with character development, and the series of coincidences and fluke meetings that hold the plot together are forgivable given just how entertaining the rest of the film is.

Final Rating – 8 / 10. OK it isn’t all-time great and it relies on Murphy’s charm to smooth over some dull spots, but this remains undeniably rewatchable and continues to amuse.

In 1994 Eddie apparently needed the cash bad enough for Beverly Hills Cop 3 to be greenlit, his last great movie and critical success being Coming to America in 1988, directed by John Landis.

So in a sign that reeks of desperation, one John Landis was brought in to direct this flaccid piece of crap. Just imagine everything that made the first two films memorable, remove them, and insert a couple of tired Blues Brothers rip-offs and some try hard ‘jokes’.

Eddie is of course Axel Foley, the Detroit cop who is yet again dragged to Beverly Hills to investigate a crime on one of the more tenuous links in history – explain to me why the US mint printing plates were in a truck in Detroit again? – in any case they were, and in a raid that coincidentally took place during the ill-fated handover Axel and his colleagues are surprised to find that they come under unexpected automatic weapons fire, during which Inspector Todd is unfortunately killed.

So with Todd gone and a couple of threadbare links to California, off Axel goes yet again. Bogomil is not even mentioned and Taggart is written off as ‘retired’ (you would have thought a great mate like Axel would have known this), so we are left with Sergeant Billy Rosewood as the one remaining Californian connection.

Within minutes of arriving at the theme park in question Axel meets a woman named Janice (Theresa Randle) who is in so many scenes that she apparently runs the entire park and must work 24/7.

Axel also immediately runs into the bad guy who offed Todd – so much for suspense and build up.

Knowing full well whodunit and where he is, the remainder of the film sees Axel show up again and again, run into Janice, get shot at or captured, and be repeatedly bailed out by Billy Rosewood, Taggert’s replacement John Flint (Hector Elizondo), who I might add he met for 60 seconds and apparently immediately became fast friends, or an extraneous FBI agent who shows up periodically to provide unnecessary confusion and/or intrigue, depending on how caught up you are in this dross.

Landis squeezes every ounce out of the theme park setting, therefore we have Axel wearing the big character suit, an escape in an automated ride area, and a rescue from the ferris wheel. He also shamelessly steals two notable sequences from The Blues Brothers, the first being a car chase which results in the car literally falling apart around the driver at the end of the scene, the second being the overuse of police, military and Baywatch (you read it right) personnel in what should be a routine operation – complete with the ‘hut-hut-hut’ dialogue.

The problem with BHC 3 is that the love-hate relationship between Axel and Rosewood/Taggert/Bogomil is no longer, with Taggert and Bogomil gone and Rosewood fully on Axel’s dick all news about Axel’s shenanigans are met with an eye-rolling ‘That’s our Axel’, instead of incredulous expressions. They attempt to compensate for the lack of tension by making the bad guy especially heinous (‘He killed Inspector Todd! How could he?’) but this falls flat too.

Everything about BHC is watered down and uninspired, it asked for leaps of logic that left me incredulous, and had action and comedy sequences that lacked both action and comedy, this left me sad.

Even the soundtrack is simply terrible, instead of decent songs that fitted the film they had one totally forgettable track and then repeated the memorable “Axel F” theme ad nauseam using different bands and tempos.

As we know watering down a classic is unforgivable. Now in this case I am referring to not only the immortal theme music, but also the series.

Final Rating – 4.5 / 10. A lazily written, sloppily directed ending to a solid action-comedy trilogy. Another case of a series being allowed to go to the well one time too many.

This is another example of renting/buying films 1 and 2, and pretending that the third film was never made. The same way there was no Rocky 5 or Indy 4…

While I try to throw a joke or two into proceedings when I can all of the opinions presented in my reviews are genuine. I don't expect that all will agree with my thoughts at all times nor would it be any fun if you did, so don't be shy in telling me where you think I went wrong... and hopefully if you think I got it right for once. Don't be shy, half the fun is in the conversation after the movie.
View all posts by OGR →
This entry was posted in Eddie Murphy, Film, Great Movies, Movie Marathons, Movie Reviews, Superstars, Worthwhile Movies. Bookmark the permalink.