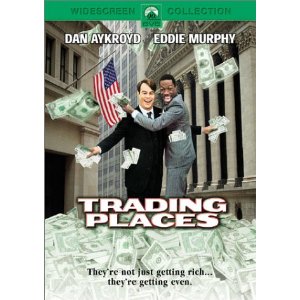 We all about the benjies…

Dan Ackroyd effectively lost any credibility that he had by churning out Blues Brothers 2000 – a film I’ve never seen and refuse to acknowledge (unless I am bagging it) – but in the 80s he was often pretty funny.

Eddie Murphy on the other hand, was the king of comedy and ruled the 80s, then he was still around in the 90s, and since 2000 unless he is a talking donkey no-one wants to see his shitty flicks.

In Trading Places – as the name suggests – two rich elderly businessmen Randolph and Mortimer Duke have a wager that when placed in the right environment the actions and behavior of the subject can change.

For better or worse.

So they put into action a fiendish plot to do just that. Louis Winthorpe III (Ackroyd) has everything, a huge plush office, a privileged and pretty fiance, a fabulously appointed home replete with his own butler Coleman (an understated and classy Denholm Elliott). Louis is destined for a fall…

Once Louis is penniless, jobless, newly single and with a reputation akin to swamp-rats, the Mortimers decide they must find an unfortunate man of dubious character to replace him.

That man is Billy-Ray Valentine (Murphy), a foul mouthed and shallow conman who is certain that this must all be a joke.

So while Billy-Ray takes the chance to live the high life and starts by throwing freaky parties in his new home, Louis must start rebuilding from the ground up, along with a friendly hooker named Ophelia (Jamie Lee Curtis) who offers to help him out.

Trading Places is an 80s film so there ain’t much more to it than that, the jokes are a little dated and much of the humour comes from the sheer fact that the two are so very different and their reactions to their new digs.

Eventually the pair meet and realise exactly what has occured, and with Ophelia and butler Coleman in tow they decide to put the Mortimers back in their box.

Trading Places isn’t a laugh a minute but it has a few solid jokes and a memorable scene or two. While it hardly represents the best work of messrs Murphy and Ackroyd it is also nowhere near their worst, definitely better than anything they’ve made in well over a decade.

Final Rating – 7 / 10. Any movie featuring a man in a monkey suit taking a banana in the tailpipe from a real gorilla in the name of comedy must be worth a look.

While I try to throw a joke or two into proceedings when I can all of the opinions presented in my reviews are genuine. I don't expect that all will agree with my thoughts at all times nor would it be any fun if you did, so don't be shy in telling me where you think I went wrong... and hopefully if you think I got it right for once. Don't be shy, half the fun is in the conversation after the movie.
View all posts by OGR →
This entry was posted in Eddie Murphy, Film, Movie Reviews, Worthwhile Movies. Bookmark the permalink.