Before 48 Hrs Eddie Murphy was that guy what were funny on the TV sometimes, with only a couple years on Saturday Night Live under his belt. Nick Nolte was actually the headliner for 48 Hrs with well over a decade of TV and films under his belt. Both are still acting, though Nolte has readily embraced his role playing status while Murphy has sullied his legend by steadfastly refusing to fade away, leading to a series of increasingly regrettable films with diminishing quality and box-office.

I’ve said before there is a generation of kids who think Murphy is the voice of a donkey, who has parlayed Shrek into branching out into crap like Norbit, Meet Dave and Kid’s stuff.

I recently found a double DVD of the 48 Hrs films, and as I remember the sequel being one of the many films released between 1988 and 1991 that I saw in my local dingy cinema I thought I would revisit the pair of films. 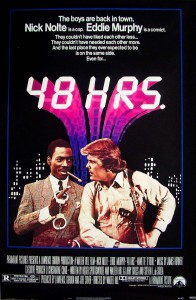 The strength of 48 Hrs – make that both films – is that this is truly a mismatched duo. Nolte plays Jack Cates as a gruff, clumsy, violent man always with a smoke in one hand and a drink never far from the other.

Cates is also not afraid to use physical and verbal bullying to get his way. He skirts the rules, ignores the reports and apparently is hellbent to get his man.

Murphy on the other hand is Reggie Hammond, his mouth gets him into and out of trouble, he is slick, quick witted and resourceful and never short of an opinion. 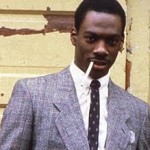 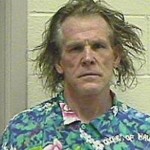 Given the actors portraying the roles it is not unfair to say that they either cast the roles perfectly or used the actor’s own traits as a character template.

Cates is a cop on the hunt for a pair of convicts named Albert Ganz and a towering Native American named Billy Bear. The duo created a pile of bodies during their escape and are high priority targets. Cates logically thinks that it might help to quiz one of their still imprisoned ex-partners to plot where they might lie low…

Reggie Hammond is that ex-partner, and he reluctantly agrees only on the proviso that he might be released temporarily so he can use his street contacts and nous to locate Ganz and Billy. It turns out that Reggie also has reason for wanting the pair back in jail.

There is genuine animosity between Cates and Hammond, as mentioned above Cates will do anything to keep Hammond in line, continually referring to him as ‘convict’ and worse… in the 2000s this is rightfully abhorred but I guess even as recently as the early 1980s casual racism was still quite commonplace.

Still with the friction well established the two move about San Fransisco trying to track down the violent escapees, with Reggie’s rants and complaints getting constantly getting on Jack’s nerves, often leading to predictable bouts of casual violence. (Somehow racism has become taboo but smacking guys around will always be funny.)

There are more highlights than will usually be found in a 1980s movie – they mostly go ‘Big intro… nothing much for 40 minutes… chase scene… nothing for 20 minutes… finale… credits’ – but the crowing glory might well be when Reggie rousts a redneck titty bar in a search for information and… um… temporary female companionship.

The finale is essentially a 40 minute chase scene through the backstreets of San Fransisco towards a predictable yet satisfying conclusion.

The soundtrack is solid and the kettle drum theme quite memorable decades later, and Walter Hill movies always have some of the more satisfying loud and crisp gunshot sound effects, and the recipients of said bullets always seem to manage to defy gravity to fly dozens of feet backwards some feet from the ground, often through windows.

48 Hrs is efficiency and entertainment through simplicity, the action is noticeable for its realism and lack of unnecessary flair, the numerous jokes come in the flow of the film and not at the expense of the story, and the very fact that Hammond and Cates are so different as individuals provides for consistent tension, often providing more violence and trash talking.

Final Rating – 7.5 / 10. 48 Hrs might not spring to mind when thinking about the ‘classics of the 80s’, but it is worth noting that this was one of the pioneering mis-matched buddy action flicks, and it is worth a look even 3 decades on – especially when compared with the stuff Murphy has released in the last decade. 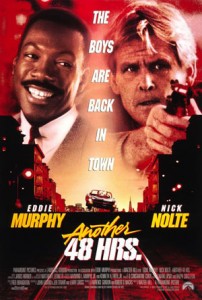 The inevitable sequel is hardly original in any sense of the word, but again that works in the film’s favour.

See if this sounds familiar:

Hardened cop Jack Cates (Nick Nolte) obtains a temporary release for convict Reggie Hammond (Eddie Murphy) in order to hunt down some hardened criminals linked to a major drug dealer in the San Francisco area known as the Iceman. Violence and profanity ensue…

Many of the minor characters from the first film return – predominantly cops as most of the bad guys ended up dead – even the music is essentially the same. Hell I’m even about to give it the same score!

Jack and Reggie trail the Iceman through the same areas, using almost the same techniques, often resulting in the same trail of bodies. The filmmakers smartly rev up the friction in the early goings and maintain it so that the pair are always just a little on edge and distrustful of each other.

Internal affairs are on Jack’s case due to his ‘carefree’ attitude to the law and procedure, and Reggie is being dogged by rednecks again. There is another bar fight, another hotel shootout and another standoff. This film though obviously boasts a bigger budget, with most of it spent on big explosions and a few eye-opening stunts.

Final Rating – 7.5 / 10. Another 48 Hrs doesn’t reinvent the wheel to bring Reggie and Jack back together, if anything this ‘same (funny action-packed) shit, different (two) day(s)’…

In Summary: Given I gave both films exactly the same rating I haven’t left much wiggle room to change my overall score. Suffice to say if you like 48 Hrs you’ll enjoy all 96.

Because they are both very similar though you might benefit from allowing a couple days – shall we say 48 Hrs? – between the flicks to prevent ‘wait isn’t this what we just watched’-itis.

While I try to throw a joke or two into proceedings when I can all of the opinions presented in my reviews are genuine. I don't expect that all will agree with my thoughts at all times nor would it be any fun if you did, so don't be shy in telling me where you think I went wrong... and hopefully if you think I got it right for once. Don't be shy, half the fun is in the conversation after the movie.
View all posts by OGR →
This entry was posted in Eddie Murphy, Film, Movie Marathons, Movie Reviews, OGR Recommends, Superstars, Worthwhile Movies. Bookmark the permalink.