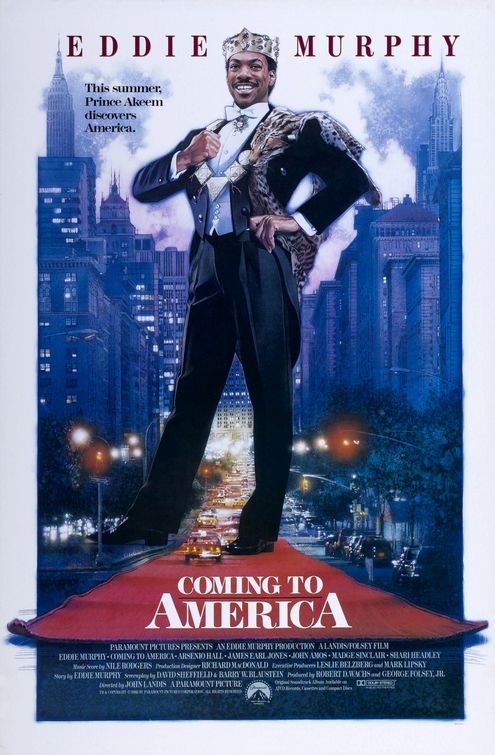 It is 3 minutes and 45 seconds after the movie starts that the central character of Akeem, played by Eddie Murphy actually speaks. It is 45 seconds after that when the first joke is fired, not a great one it must be said (it’s literally a toilet joke), but from that point on you don’t go another 3 minutes 45 seconds without laughing, quite often not even 45 seconds.

Coming to America was directed by John Landis. In fact with this, The Blues Brothers and An American Werewolf in London all being varying degrees of awesome it’s a shame he hasn’t made more films even though he has some black marks on the resume including the abominable Blues Brothers sequel. (Never seen it, never will.)

The beauty of Coming to America is that it relies on what is almost a threadbare plot and gives enough room for the actors to provide the funny, in the wrong (*cough* Sandler) hands lesser comedians (*cough* Schneider) could kill the film with their hamming (*snort* Ferrell) or lack of range (*ahem* “Look at me, I’m down to Earth” – Aniston).

Luckily at this time Landis had Murphy in his prime, Arsenio as a great character actor and foil, and a bunch of bit part guys and dignified straight men (John Amos, James Earl Jones) willing to dumb down just a little.

That threadbare plot involves the sole heir to the throne (Murphy) of a made up African nation going to America to find his bride, as he is not happy with the arranged marriage being prepared by his parents in his native land.

The lushness of Akeem’s situation is very clearly illustrated early on, he has dozens of people at his beck and call, barely does anything by and for himself, and has access to anything and anyone he chooses.

His Father the King is James Earl Jones, and he clearly wants Akeem to follow tradition and accept his custom built new bride. When Akeem shows some trepidation the King agrees to let him take a break, thinking that a month away will let him “clear his system”, or perhaps something less crude, so he will come back in a better frame of mind. Along for the ride is his faithful friend Semmi (Hall) so he has someone to talk to and to keep him out of trouble. 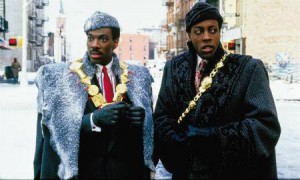 Once in America, specifically New York, Akeem and Semmi seek to blend in. Early efforts don’t go so well, which would generally be the case when wearing the GDP of some nations, and having more staff on hand than many multinational companies. 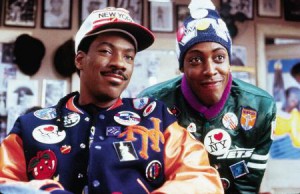 After they manage to simplify matters by moving into a dingy apartment they get to the business of getting Akeem some tail. They hit every disco in town with no success, other than highlighting Murphy and Hall’s talent for multiple roles and proving that every chick in New York is apparently nuts.

The local barber points the boys in the direction of the Black Awareness Rally happening that night, and it is at that event that Akeem notices Lisa MacDowell (Shari Headley), a confident, intelligent and beautiful young woman who is the daughter of the caterer to the event.

Search over. Only Lisa MacDowell does not know that Akeem exists, and he does not want to win her over with money and tales of “don’t you know who I am”. Besides that Lisa already has a boyfriend, the son of the Soul Glo empire named Darryl (Eric La Salle).

Leo MacDowell (John Amos) runs a Macca’s rip-off restaurant called MacDowells and Akeem and Semmi get jobs there as cleaners, never letting on their true backgrounds.

Over time, Lisa acknowledges Akeem and they gradually seem to be getting nearer and nearer… then, just as things heat up Semmi and Leo meddle (Semmi 3X!) and shit gets complicated.

Now this is a comedy, and a damn good one, so aside from the factual stuff above it is hard to explain what happens without just recycling the jokes, and I ain’t no Two & a Half Men writer. Suffice to say that Murphy and Hall play many roles each, often in the same scene, always to great effect, and that there is not too much dead space between laughs from the first scene through the last.

When you have a million jokes being fired every which way they aren’t all going to work and some fall a little flat or haven’t dated extremely well in 20+ years, but no joke stands out as failing or as being embarrassing. Highlights include the Soul Glo jingle (still hilarious), the Black Awareness Rally performance by Randy Watson (Murphy) and emceed by the Reverend (Hall), and the early “courting” ceremony when Akeem first meets his (arranged) bride to be. 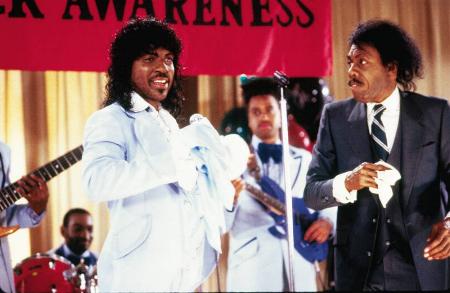 Aside from the songs (the background music is great) this film hasn’t dated a bit, despite the fact that I can’t think of a single white guy in a lead role (aside from the lettuce-washer!) it shouldn’t be taken as a “black” movie, Coming to America is simply a funny movie, period.

I knock .5 of the score simply because the last 10 minutes lag just a tad, the first 100 odd minutes are comedic perfection and extremely rewatchable.

Final Rating – 9.5 / 10. For everyone who thinks Eddie Murphy is a talking donkey (and hack actor) please watch this to see that at one time he was the best in the biz.

While I try to throw a joke or two into proceedings when I can all of the opinions presented in my reviews are genuine. I don't expect that all will agree with my thoughts at all times nor would it be any fun if you did, so don't be shy in telling me where you think I went wrong... and hopefully if you think I got it right for once. Don't be shy, half the fun is in the conversation after the movie.
View all posts by OGR →
This entry was posted in Eddie Murphy, Film, Great Movies, Movie Reviews, OGR Recommends, Superstars, Worthwhile Movies. Bookmark the permalink.