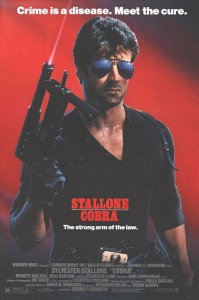 That's a funny tube of cream he's holding there...

My name is Lieutenant Marion Cobretti, but everyone just calls me ‘Cobra’. I even have a picture of a cobra on the hilt of my handgun that always juts out of my waistband to show how proud I am of my nickname.

What else? Well, I was told to simply be honest and try to tell you a little about myself, so here goes. I am not a tall guy, but I am pretty buff I guess. My standard ‘outfit’ is a black jacket, tight jeans and reflective sunnies. I have thick lustrous hair, a perpetual 5 o’clock shadow and a toothpick hanging out of the corner of my mouth. Y’know, for the ladies…

Well that’s how I look, what about the real me behind the badge? Well in truth I am a violent person, I often solve my problems with my fists or weapons, though this might have more to do with me being ill equipped to deal with issues verbally and not having the mental capacity to solve problems without resorting to more physical means of communication.

(I am sure this might be frowned upon by potential dates but I can assure you it works well cinematically.)

My likes: The poetry of ee cummings… just kidding.

I like long stakeouts on the beach, pleasant car chases in my hotted up classic muscle car, and my favourite colour is red – namely the bright gush that spews from a freshly punctured torso.

Gratuitous Pepsi product placement also does it for me, as well as car chases, explosion and shooting first and asking questions later.

I also like long montages backed by crappy 80s music, shootouts in hospitals, shootouts in safe houses, and shootouts in abandoned factories that continue to operate even though there are no staff to run them. 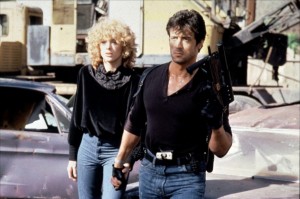 My turn-ons? Well this is a little embarrassing. I have a weakness for tall Scandinavian blondes who look so mannish that others might question their gender. You know, Bridget Nielson types.

Even better if they are the target of gangs of people pretending to be a single serial killer called the Night Slasher.

My turn-offs: Gangs of people pretending to be serial killers called the Night Slasher, especially those that hold ridiculous rituals in silhouette where they clink axes together in unison.

Authority figures who don’t ‘get’ that I have no time for the Rulebook.

I am looking for: People in the mid 30s who were silly enough to remember the 80s action flick ‘Cobra’ favourably, forgiving it all its flaws and inanities. Hopefully these boneheads… ahem, cinema aficionados, might shill a few bucks to rent the DVD in order to fill a review on some crappy website read by almost dozens of people each month.

Final Rating – 6 / 10. A companion piece to Schwarzenegger’s ‘Commando’, Cobra inhabits that zone where the face on the VHS cover and frequent violence justified the rental. In dating terms Cobra is kinda like the joke about the moped, you might enjoy the ride, but you’ll hardly be bragging to your friends afterwards…

While I try to throw a joke or two into proceedings when I can all of the opinions presented in my reviews are genuine. I don't expect that all will agree with my thoughts at all times nor would it be any fun if you did, so don't be shy in telling me where you think I went wrong... and hopefully if you think I got it right for once. Don't be shy, half the fun is in the conversation after the movie.
View all posts by OGR →
This entry was posted in Film, Movie Reviews, Sly Stallone. Bookmark the permalink.