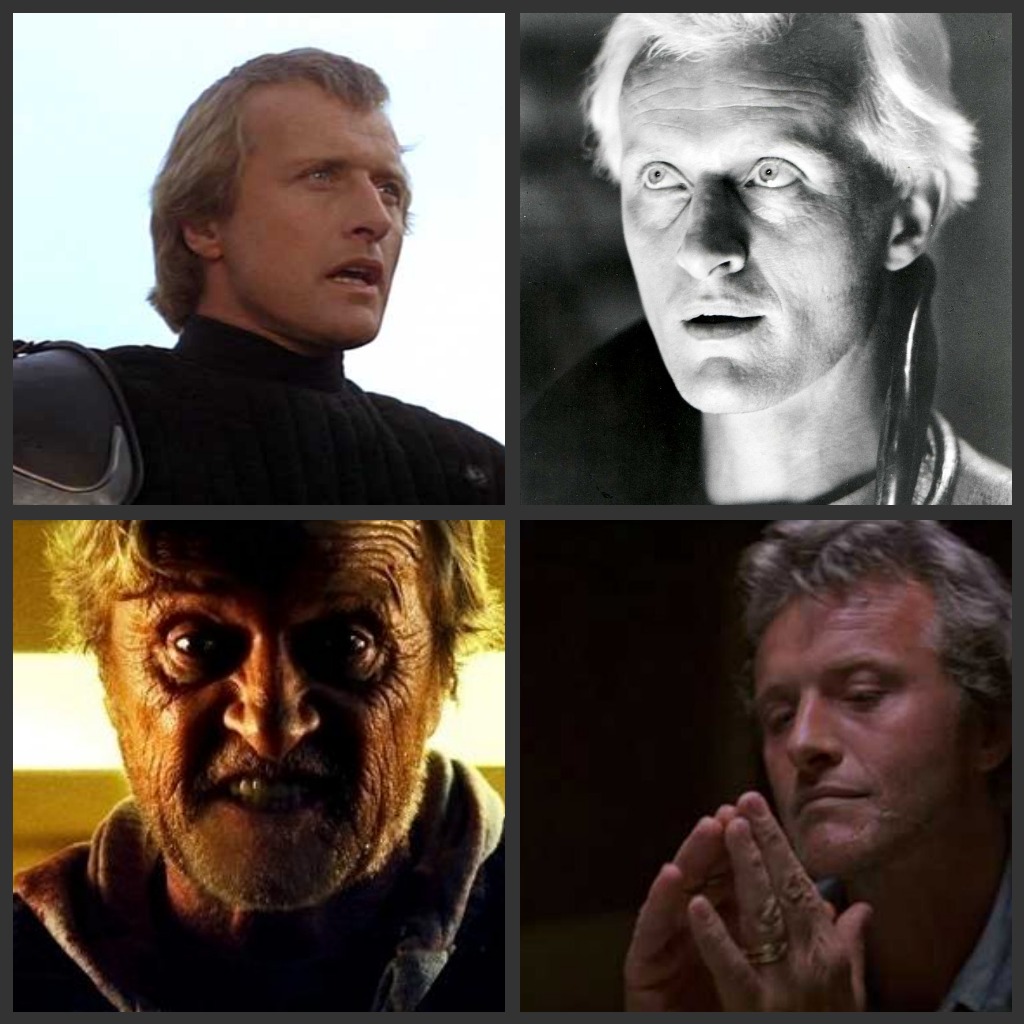 Last week saw Part 1 of my personal celebration of the great Dutch 80s and 90s B Movie staple, the always interesting Rutger Hauer.

Today we continue on our merry little marathon with a couple more films of varying budget, quality and entertainment value, always anchored by the bright blue eyes and typically efficient performance of one Mr Rutger Hauer.

One of the B movie genre’s finest, only now starting to gain recognition with roles in Batman Begins, Sin City and The Rite. 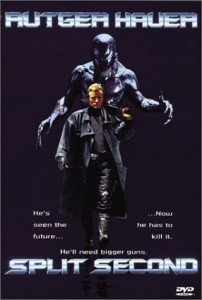 Split Second is hardly essential film-making, but it is a prime example of how to make a low budget film more entertaining than it has a right to be. Put another way, if there is a calculation that divides a budget by entertainment value, Split Second might not lead the way, but it is a damn sight ahead of many so-called ‘blockbusters’ in value for money.

But still you can’t ignore the fact that this film runs on the smell of an oily rag, it’s evident from the first frame all the way to the reveal of the shonky ‘beast’ near the end, a creature that elicits more chuckles than screams.

Or perhaps you missed it… (I love it when the ‘movie future’ becomes the past.)

Rutger Hauer plays Stone, a hard nosed, grizzled veteran who works alone and ignores everything in the rule book. He is a hard drinkin’ loose cannon who does things his way, and has done ever since his partner and best friend was killed by a notorious and as yet on the loose serial killer.

Well imagine our surprise when said killer reappears on the scene, literally ripping hearts from bodies and taking bites from his victims. Reluctantly allowed on the case only due to his previous experience with the killer, Stone is aghast (pissed might be more accurate but is a worse scrabble term) when he is saddled with a younger partner named Durkin who is everything he is not: a straight-laced, clean living logical thinker who not only follows the book but practically lives by it.

As the gnawed on bodies of the innocent pile up and Stone and Durkin nearly cross paths with the unseen killer many times it grows more evident that this case is perhaps more personal for both Stone and the pursued, with the lines between hunter and hunted becoming increasingly blurred. The last straw comes when a human heart is express posted to Stone – with a large bite already taken from it.

This is a fairly standard set up for many sci-fi flavoured films, the thing that differentiates Split Second is the humour. While hardly Beverly Hills Cop or Red Heat this film is laced with lashings of black humour of the driest kind, much of it from Durkin, who it would be fair to say is hardly the comedic type but still manages many of the best lines, his rant about finding ‘big fucking guns’ after first contact with their prey still elicits a chuckle and his progressive hardening up as the film progresses is quite humorous.

The rest of the film is to be frank amateurish, when revealed the killer and most of his previous actions make no sense whatsoever. How a 10 foot tall long fanged alien/monster can lurk in nightclub corners unseen, manage to package and address a human heart to the right recipient and also write notes for his pursuers is beyond me.

Equally confusing is the presence of Kim Cattrall as a sex-object. As someone who has had the misfortune of seeing 12 minutes of Sex and the City any possibility of attraction is long since dead, despite the fact that when this was made she is in her so-called ‘prime’. But here she is the dead partner’s ex-wife, who is there to be occasionally nude and vulnerable…

There is some mystical supernatural crap designed to justify – or distract us from – the situation, but misguided symbolism or not Split Second is less about the logic and more about the fun in watching Rutger Hauer play a bitter and violent cop as he chases some sort of monster.

Obviously cheap and filled with blood and a few laughs, Split Second provides a stronger budget : entertainment ratio than a thousand Transformers or Harry Potters ever could. It still isn’t amazing but you could do a lot worse.

Final Rating – 7 / 10. Split Second might not even be around any more – I bought it many years ago on VHS and dragged that out the other night – but if you even pretend that you are a Rutger Hauer devotee you owe it to yourself to check it out. 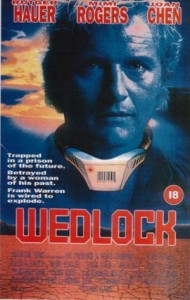 ‘Sometime in the future’ (probably 1997), an electronics whiz gone bad named Frank (Rutger Hauer) was fucked over by his partners in crime and sent to a revolutionary new prison. The hook of the new prison is that there are no walls or draconian confinement measures, prisoners wander around as they please. But each prisoner wears a bulky electronic collar this explodes if someone attempts to remove it. Furthermore each prisoner is linked to another unknown prisoner in the facility, and if they move more than 100 yards apart *BOOOM!!!*, both collars explode and you can cancel the hat shopping trip. Bad luck I guess if your partner decides suicide is the a solution…

Of course Frank manages to uncover the identity of his collar-buddy and the two escape, spending an hour or so coming perilously close to breaching the 100 yard boundary and going pop. To complicate matters the prison warden wants Frank for more than escaping, he wants to get his paws on the 25M he and his fellow crims managed to get away with, crims that by the way are back on the scene and want to talk to Frank for themselves for some reason.

Hauer actually gets to be a little sarcastic and dare I say salty with his dialogue in this film. Given the fact that it was always going to be a one note straight to VHS flick he hams it up merrily in some scenes, most notably when the warden initially hits him up for the diamonds. Rutger was never really very good at comedy, but at least he tries here.

Wedlock is actually quite solidly plotted in the early going. The initial robbery is well thought out and creative, and they obviously spent a bit of time fine tuning the details in the prison where other films might’ve said ‘we thought of the exploding collars, that’ll do’.

The relationship between Frank and fellow escapee played by Mimi Rogers is forced and arbitrary – as is to be expected in a B film where actual chemistry is less a priority than finding someone they could afford – and the supporting cast of fellow 80s and 90s bitzers only serve to further highlight the low budget nature of the film.

Final Rating – 6.5 / 10. Wedlock will definitely not demand a spot in your DVD collection, but 20 years or so since release it still justifies the hour and a half of your time. 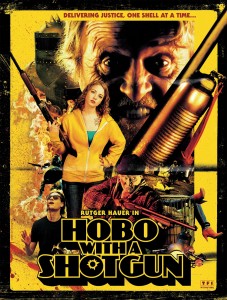 Hobo with a Shotgun

Finally the tenuous justification behind Rutgerfest, Rutger’s first headlining role for some time, in an environment that should really have worked.

It’s one thing to deliberately make a movie reminiscent of the 70s and 80s low budget exploitation B flicks, direct to either drive in or VHS depending on era. But making the same film sub-B grade cannot be written off as clever or retro.

Mr Hauer is the titular homeless man, weathered, beaten and bereft of hope, he begs on street corners hoping to amass enough savings to purchase himself a lawnmower. But this hobo lives in a lawless land where the value of humanity is apparently negligible, and the police presence at a similar level.

A lawless land where a scantily clad chick might dance in the arterial spray over a newly decapitated torso.

Yeah. That sort of lawlessness.

A morally bankrupt land where a nurse might stand over a patient and scream “Live you fucking whore!”

Yeah. That sort of morally bankruptcy.

Drake is the name to fear in this lawless, morally bankrupt, unnamed land. It is he that runs all crime in the city, with two sons as his apprentices to whom he attempts to impart his knowledge – read: make them more nasty and reprehensible.

Hobo (he is never named), makes the mistake of defending the virtue and honour of a young woman with seemingly little virtue or honour to begin with, and this brings the attention of the apprentices, most notably Slick.

Hobo initially attempts to lay low, but as things tend to do in these films where revenge and retribution are prevailing themes he ultimately snaps and sets about putting things right.

This involves killing a lot of people, and if the title doesn’t hint as to how then I’m afraid I can’t help you much. 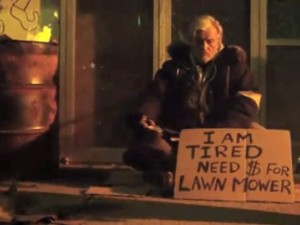 Hobo’s vigilante justice brings much attention from the public and the media, surprisingly not from the police who are never sighted in the film, this enrages Drake who feels that his status as the most feared guy in the area is suddenly being questioned. He puts a bounty on the head of all homeless, especially Hobo.

The last third of the film is a triumph of garishly bad lighting and equally shonky acting.

There is such little originality to be found in Hobo that I sat back and pondered exactly what the filmmakers expected the audience to like. The action was pretty average, the *comedy* was practically non-existent even, and the deliberate bad acting and sheer hamminess not noteworthy enough to demand a recommendation. Geez, if that is what you want from a film John Carpenter made a dozen films through the 70s and 80s with similar sensibilities that absolutely crush this film – and a few worse ones too…

The only thing I kept coming back to was the gore, and there I will concede that the gore in Hobo with a Shotgun certainly was ‘extreme’ enough to get attention. But ultimately in an 80 minute movie with precious little else going for it I will leave it up to you to decide if that is enough to warrant a rental.

Final Rating – 4 / 10. An unfortunate end to Rutgerfest, some gore, some mean spirited and violence and profanity wrapped in a deliberately shitty looking production. And apparently they are the reasons to watch this!

While I try to throw a joke or two into proceedings when I can all of the opinions presented in my reviews are genuine. I don't expect that all will agree with my thoughts at all times nor would it be any fun if you did, so don't be shy in telling me where you think I went wrong... and hopefully if you think I got it right for once. Don't be shy, half the fun is in the conversation after the movie.
View all posts by OGR →
This entry was posted in Film, Movie Marathons, Movie Reviews, Worthwhile Movies. Bookmark the permalink.