The Good, the Bad and the Ugly (Review) 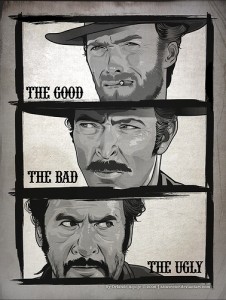 First up for a spaghetti Western this doesn’t appear anywhere near as hackneyed and half-arsed as the label might lead you to believe. In fact the blu-ray I rented looked pretty awesome.

The tale of the three titular desperados is long and elaborate. How long? How about 3 hours long. Long enough to have two onscreen deaths and a full meal eaten before a line of dialogue is uttered.

The Good is Clint Eastwood, a rough n tough cowboy who plays as fair as you play him. He sports a perpetual three day growth and an equally permanent short cigar propped out of the corner of his thin lips.

The Bad is Lee Van Cleef,  a dodgy soldier on the lookout for a man with one eye, for reasons that I will explain later.

The Ugly is the only guy with a name used regularly, Tuco (Eli Wallach). In fact Tuco is pretty much the star of the show, though Good n Bad get their moments.

Good, Bad and Ugly are eventually all in pursuit of the same target, stolen gold coins, the whereabouts of which are only known to a one eyed soldier who sports a patch.

The greater part of the film plays like those riddles where the farmer must get the chook, the fox and the wheat from one shore to the other without something eating something else, only he can only fit one thing in his boat at a time. The Bad knows the location of the gold, the Good knows not the location but specifics once you get there, and the Ugly is the key to bringing all loose ends together.

Each of the grimy trio spend ample time getting to know – and beat the shit out of – each other. They take turns leaving each other for dead and at various times all seem to hold the upper hand, only to have it taken from them. 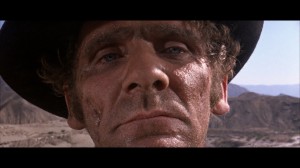 Even in the Wild West papparazzi had no sense of personal space.

There are loads of close ups highlighting shifty eyes, many slow drawn out scenes including what must be the longest Mexican stand off on history, and I must say the makeup jobs were quite well done. As the film is set in the US civil war era some of the settings are surprisingly intricate and feature a cast of thousands of well costumed extra, further dispelling any notion that I had of a ‘spaghetti Western’ being a cheap knock-off, and though the length and long periods of inactivity were a little different to my modern day A.D.D. sensibilities I was rarely bored, which in a three hour 45 year old film might be the strongest recommendation I can give.

Final Rating – 7.5 / 10. I wish I could explain it better but the circular sounding whistle that forebodes every gun fight (and parody) know to film originated in this film. If you only watch one Western this year – or this decade – you could do a lot worse than this.