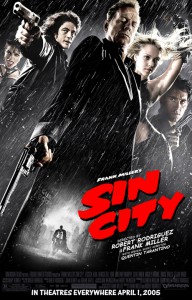 Sin City is a tremendously ambitious work from Robert Rodriguez, a director who formally only made films on his terms, leading to many films that were all entertaining but reasonably similar.

With Sin City he changed things up, shot entirely on green screen in black and white withan entirely computer generated backdrop, and utilising only sporadic use of colour to highlight certain aspects and features, Sin City looks like almost nothing before it. (It was tried again by the co-director Frank Miller in The Spirit, with less than satisfactory results.)

The events that occur over the two hour running time are taken from three comics *AHEM* graphic novels created by Frank Miller, whose vivid imagery and odd angles apparently convinced and influenced Rodriguez’ own shot selection to the point he gave Miller co-credit.

The graphic novels are set in the fictional BaSin City (hence the title), where crime, corruption and general naughtiness are commonplace and everyone has a story to tell… generally not a nice one.

The three stories intertwine quite nicely and wrap around so that everything is resolved in the most satisfactory way possible, with each story occasionally momentarily touching upon events from other tales, though not directly. 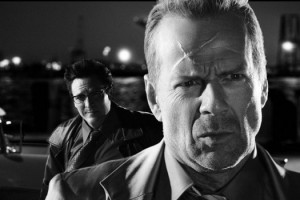 The first story follows grizzled veteran cop Hartigan (Bruce Willis) as he closes in on the abductor of an eleven year old girl named Nancy. 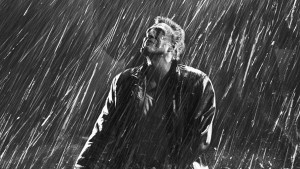 The second story follows the exploits of Marv (Mickey Rourke), a hulking, disfigured thug with anger issues, a drug dependancy and perhaps mental problems – no wonder Mickey Rourke got rave reviews, he was playing himself! 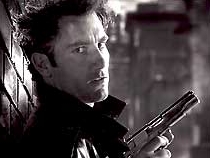 The final tale involves a young waitress (Brittany Murphy), her violent prick of an ex Jackie-Boy (Benicio Del Toro) and her new flame Dwight (Clive Owen), and the subsequent trip that Jackie-Boy and Dwight take separately to Old Town, a scungy area that is run by the local hookers.

The sparse use of colours only serves to highlight the reds and yellows when they are used, and even without colour the black and white film is exceptionally clear, even in the rain sequences.

Each tale has its own share of depraved acts, dialogue and violence, with the oft spewing blood exceptionally lurid as it gushes over the screen in bright red… yellow and white! The violence is more over the top than most manga films, with decapitations, torture and various severings and shootings.

Before you ask “well how bad could it be” consider the following short list of characters: 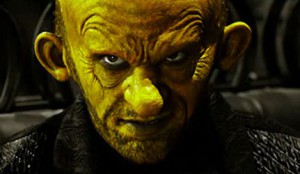 Guess which one I am?

And that’s before I get to the cops, thugs, heavies, crimelords and the usual minions and sacrificial lambs.

An All-Star cast fill the film with recognisable faces even in minor roles, without running down the laundry list though highlighted actors include Bruce Willis, Mickey Rourke, Clive Owen and Jessica Alba (whose contract as a stripper specified no-nudity… bitch!). 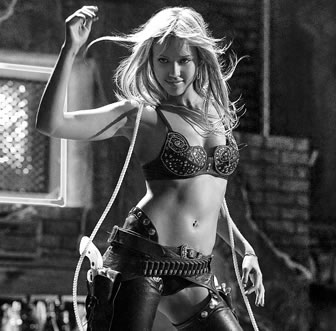 Sin City is never boring but rarely hits any great heights, you say Wow to everything onscreen but rarely to any one moment or action – though there are some gruesome eye raising moments and a couple of effective action sequences. As such Sin City is perhaps best described as a great achievement – if not a great film… but I welcome a sequel as I think this material has a great film somewhere in it.

Final Rating – 8 / 10. Violent, noirish and filled with people you wouldn’t invite to dinner even on a dare. Everyone in Sin City has a story, hopefully the sequel finds better ones.

While I try to throw a joke or two into proceedings when I can all of the opinions presented in my reviews are genuine. I don't expect that all will agree with my thoughts at all times nor would it be any fun if you did, so don't be shy in telling me where you think I went wrong... and hopefully if you think I got it right for once. Don't be shy, half the fun is in the conversation after the movie.
View all posts by OGR →
This entry was posted in Bruce Willis, Film, Movie Reviews, OGR Recommends, Worthwhile Movies. Bookmark the permalink.