Not Another Teen Movie (Review) 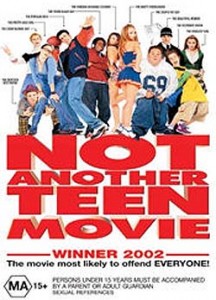 I agree, please no more!

My sentiments exactly! I never loved spoof movies, and since “Scary Movie” they have only gotten lazier and lazier. Someone needs to tell the writers that cramming in as many pop culture references as possible isn’t a joke in itself.

It used to be that a spoof movie would take a well known scene and take it in another direction, with ideally humerous results. Now it seems enough that we the audience say “oh they mean Hellboy”, or “this is that bit from American Pie”. It doesn’t have to be funny apparently. Worse still is that we now seem to have such short attention spans that referencing a movie isn’t necessary, simply a viral video or recent event.

I guarantee that (if it hasn’t already happened) the next spoof movie will include:

And so on and so forth, if there is an obvious theme there it should be that EASY TARGETS are the norm (just like Eminem. Oooh he’s having a go at Kim Kardashian, that’ll cost him!).

Anyway, now to review this piece of crap, and when I say piece of crap NATM is actually one of the better spoofs in the last decade, that doesn’t stop it from sucking though.

Alarm bells ring with Randy Quaid’s name coming up in the credits, though as one of the leading ham actors around he is ideally suited to this throwaway genre.

Set in a high school, there is no plot to speak of, only the plots of other teen movies of course. Put simply it copies all the movies where the hot guy must take a seemingly unpopular and ugly girl and make her popular and somehow attractive.

The chicks are normally Charlise Theron, Jennifer Connelly types, NATM knows this, but unfortunately once they make this clear there aren’t any more decent jokes to come from the premise.

I’ll try to list some of the jokes derived from stereotypes:

– The undercover adult in school who is clearly 50+.
– The American Beauty loner guy.
– The young guys who wanna get laid.
– The cheerleaders.
– The eccentric but hopeless friend of the unpopular girl.
– The bonehead but still popular football players.
– And their coach who swears and shouts a lot.
– The sexy exchange student, (who is nude the entire film).

– Rather than white guys pretending they’re black, one white student spends the entire film pretending he is an Asian guy. (An amusing concept not used in an amusing way.)
– Every time something happens, a doofy looking guy tries to start a slow clap, only he never gets the support and embarrassingly must give up. (I hate the slow clap in the movies thing so I laughed, and as this was what the writer’s aimed for I must give credit.)
– Mr T appears as the “wise janitor” with some sage advice and the A-Team music plays, although most people watching the film nowadays might think “Oh the guy from the Snickers’ ad!”, rather than a pop icon of the 80’s.
– I liked the nude exchange student thing, but it wasn’t funny after the initial second. So you might have to guess why I liked it. (Hint – I’m a guy.)

What more to say, the female cast is hot-hot-hot, but who cares? Jaime Pressley is the only recognizable cast member who isn’t making a “look at me” cameo, and she’s hardly a big name aside from My Name is Earl.

There are about five so called jokes in the movie that you can’t see coming a mile off, and when you don’t see the punchline it invariably fails or falls flat. I hate the insinuation that we as movie goers should find any of this funny but even the cookie cutter crap Epic Movie, Date Movie, Disaster Movie bullshit still make money for the assembly line hacks that make it and have the audacity to release it each year.

The fact is I haven’t seen many of the movies referenced in NATM, but it doesn’t seem to matter as most of the time I knew what they were talking about and didn’t just care.

Perhaps if you actually love those movies you might find some joy here, if that is the case, you are a sad strange little man, and you have my pity.

Final Rating – 4.5 / 10. Better than many similar films in the genre, but that in itself is the faintest of faint praise. Avoid all of these and tell Hollywood to stop making them.