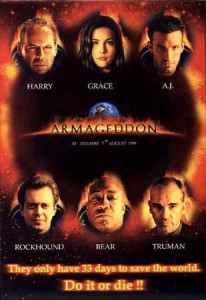 These people may save the world. And there’s not a brain in the bunch.

Everything about Armageddon is as low key and subtle as Lady GaGa. In a parade. On Halloween night.

Meanwhile Harry (Bruce Willis) is leading an offshore drilling team of crazy unique goofballs – something that they beat us over the head with for two hours. An early scene has Harry chasing AJ (Ben Affleck) around the rig with a shotgun for boning his daughter Grace (Liv Tyler). This is apparently hilarious, though I didn’t find it as awkwardly hilarious as I did that every AJ and Grace love scene is backed by a cloying sentimental soundtrack delivered by her dad. Nothing like Daddy to set the mood at business time…

Big space rocks need big drillers. With space between their ears. And these drillers be crazy. The premise is that a big hole with a big bomb will blow the big rock up. Big time.

Wow everything is shaking. “Shut it off!” Lights are flashing. “Speed it up!” This is quite dramatic apparently. There’s an awful lot of yelling. “HE’S GOT SPACE DEMENTIA!!!!”

Please allow that last bit to settle in… Space dementia.

At 150 will testing minutes, for a start Armageddon should be at least a half hour shorter, maybe cutting say four awful Aerosmith songs and at minimum three ‘we so crazy’ montages for a start. But it wouldn’t matter when the rest is still the most overwrought piece of sensationalist spam ever to be excreted into cinemas.

No one should be happy with this regardless of how much they were paid or what this earned. Bruce Willis would list 75 films from his cv before he raised this one. Liv Tyler has her role reduced to screaming and sobbing. Owen Wilson, Steve Buscemi, Michael Clarke Duncan… Why? My only hope is that this is the film that drive Ben Affleck to directing.

This is what happens when someone polishes a turd with 100 million dollars, backs it with a dozen power ballads and painstakingly extracts any potential skerrick of intelligence from proceedings, filling every blank with pretty people, flashing lights and contrived tension and/or hilarity.

Final Rating – 3 / 10. I laughed constantly, hoping to confuse my addled brain into thinking I was merely in searing pain rather than watching one of the worst films in history. This is one case where I was hoping that the giant space rock would win.