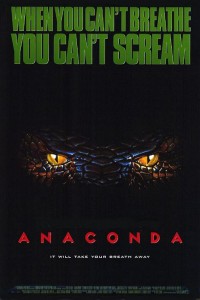 Wonder what that is.

It’s a worrying sign that the first 60 seconds of a 90 minute film feels the need to ‘serious up’ the tone by running a lengthy blurb that effectively says ‘big dangerous snakes are big and dangerous’.

Featuring a cast that is not so much ‘good’ as ‘recognisable’ Anaconda thankfully then gets down to the business of being an enjoyably inane flick with B actors wrestling fake snakes and being thrown around by big CGI effects.

The threadbare plot has a doco crew travelling the largely unexplored tributaries of the Amazon searching for a long lost tribe of primitive South Americans who legend has it are protected by giant snakes.

After a few hiccups in the mission they pick up supposedly ‘Paraguayan’ snake hunter played by Jon Voight in a hammy performance to rival that of Tim Curry in Congo. He leads the boat on a snaky… ahem ‘sneaky’ shortcut that should save all involved time. Now the fun starts.

From this point on there is little for the cast to do but look alternately scared and suspicious in between running around like white mice. The talentless J Lo looks suitably lost and confused – no surprises there – and Eric Stoltz is laid up injured for half the film while Owen Wilson hones his shaggy locked surfer boy thing that has since made him a wealthy man.

Ice Cube gets the worst wardrobe and the best lines, and I dare you not to chuckle when they show introduce ‘snake stomach’ cam near the end of the film.

While you might be laughing or gasping about ½ the time with and the other ½ in spite of the goings on, I guess one way or the other at least you’re laughing.

Final Rating – 6 / 10. Anaconda was released during a spate of creepy crawly based movies in the 90s, it won’t blow you away but it was by no means the worst of the bunch and it spawned the usual sucky sequels.