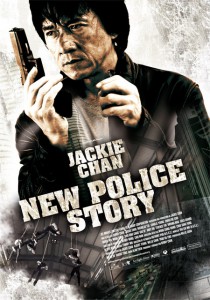 Thanks to some young, annoyingly “hip” criminals who rob banks, wait for the cops and then shoot the cops, Jackie has become a drunken piss-head has-been Supercop. This is because the troubled rich and privileged kids laid a trap for Jackie and his crew, resulting in the death of 9 cops and Jackie getting to do the “running away from the explosion” thing that he is fond of.

A young hungry partner arrives on the scene and tries to talk Jackie into going back to the case, of course he does this and wins the day for all.

It is obvious that Jackie wanted to revisit the glory of the original trilogy, he crams a lot of stuff into this film, including some pretty good stunts and some serious scenes too. But realistically the plot is too cheesy and often illogical, and the action isn’t good enough for me to forgive these gaping plot-holes and inconsistencies anymore.

A driverless bus running 27 blocks in heavy traffic without:

A bunch of kids having a big shootout with dozens of trained cops where they stand in full view, picking off cops and laughing and tallying scores all the while?

Sorry Jackie, I know you mean well and are hanging on by a thread. Don’t be Stallone and go all Rocky 6 and Rambo 4 (both adequate films but not a patch on what came before), or worse like Willis in the rumoured Die Hard 5 (please nooo… but yes too.)

Not really. And definitely no “WOW” stuff.

A lot of Xtreme (apparently) stuff. BMX, rollerblades, abseiling etc. Some of it looked cool, but “well controlled” cool rather than previous seat of your pants, “hit we could all die” cool.

This is Jackie’s Copland equivalent. Brave and vulnerable Jackie

Mitsubishi still gets paid… and Lego gets its own scene late in the film.

Jackie’s girlfriend is OK and one of the cops is supposed to be cute but I’m not so sure!

The spark is long gone. He just doesn’t have the legs to pull this stuff off anymore. SOB!

A worthy addition, but I think Jackie wanted this to be “All-time” good. It isn’t.

Final Rating – 7 / 10. Too long. Again. When the stunts are better than the fights it is time to reconsider, and that is the case here.