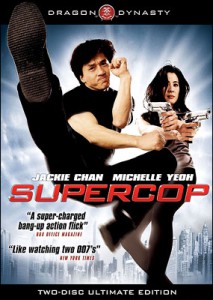 By this stage it seems Jackie wanted to move away from the standard formula that made the first two Police Story’s so successful, so in this film there is less slapstick, less interaction with May, and minimal tomfoolery with his superiors and fellow cops.

Jackie must infiltrate the evil druglord Chaibat’s gang to try to bust it open from the inside. He lies to May to get a “leave pass” and off to mainland China he goes.

In China Jackie meets Michelle Yeoh, who is his liaison and trainer. Yeoh is what separates Supercop from the first two films, it isn’t necessarily better than those two, but it does give Jackie a worthy second banana (so to speak), as in no other film until he finally met mainstream US filmmakers did Jackie have another actor that threatened to steal a film away from him. Yeoh ultimately doesn’t, but it was a close call for a while.

So after a seemingly unnecessary and somewhat overdone backstory Jackie gets “in” to the gang by breaking out one of Chaibat’s henchman, called Panther. Along the way Yeoh tags along as Jackie’s “sister”, and they each act as Panther’s bodyguards for a while to help him (and them) get to Chaibat.

Once in Hong Kong and now part of the gang they witness for themselves the extent of Chaibat’s operations, and see how brutal and savage they are. Drugs are bad kids, druglords are worse.

Whena major drug deal goes wrong a gang war escalates, which leaves Yeoh as a hostage wearing a high explosive vest, never a good thing in the middle of an A-Team/Rambo 3 style firefight.

(It did lead to one great line though, Yeoh says “I can’t be shot!” to Jackie, who replies “Well neither can I!”. Both are correct for different reasons.)

The movie finds its climax in Malaysia, where most of the best stuff listed below takes place, after an annoying “Oh my God there’s May, hope she doesn’t somehow coincidentally get involved, that would be awkward” moment, drum roll please…

May gets involved, cue the big chase and finale.

(Which after making it sound crap is actually a classic.)

Yes indeedy, although in this film there is less kung-fu, but more stunts and gunfire,

Yes again, and Michelle Yeoh has both the moves and the stunts. Her motorbike jump onto a moving train takes some topping.

This film is as serious as almost anything Jackie has done bar perhaps Heart of Dragon.

They gave May a makeover for this one, and there is what Jackie Chan (and some churchgoers) might call a sex-scene. Well for a minute they lie on the same bed together!

Yep, and Michelle Yeoh again took as many hits as Jackie. Although getting hit by a helicopter sounds worse than falling off a train.

This was made when Jackie was at the peak of his powers.

Jackie all the way, just with some different locales and a few more bullets

Final Rating – 8.5 / 10. As good as the first, a shade below the second, but a worthy entry in a massively entertaining trilogy. (At the time.)

While I try to throw a joke or two into proceedings when I can all of the opinions presented in my reviews are genuine. I don't expect that all will agree with my thoughts at all times nor would it be any fun if you did, so don't be shy in telling me where you think I went wrong... and hopefully if you think I got it right for once. Don't be shy, half the fun is in the conversation after the movie.
View all posts by OGR →
This entry was posted in Film, Great Movies, Jackie Chan, Movie Reviews, Superstars, Worthwhile Movies. Bookmark the permalink.