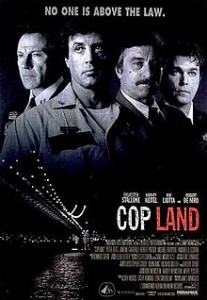 There are good films released every year with no name casts. Some of them are discovered through positive word of mouth, some unfortunately vanish without trace, known only to a few lucky die hards who happen upon them.

Then there are the other kind, the ones that are released almost every other week, the ones with big names attached that are therefore guaranteed wide release and will probably be seen by most moviegoers eventually – whether they are worth it or not is a moot point. (For example; my wife WILL eventually see the next Jennifer Aniston movie. Doesn’t matter if it is Oscar bait or a worthless turd. My money would be leaning to the latter.)

Cop Land is no Wanderlust, but in reality it is merely a very competent film that happens to boast a stellar cast from top to bottom. Keen moviegoers will recognise so many of the actors in this film and nod approvingly at each one, so much so that whiplash might be a real danger.

New York City cops are a tough bunch, facing danger every day and putting themselves on the line frequently to ensure the safety of regular citizens. To remain a beat cop takes courage, smarts, a bit of luck – and according to this film more than a bit corrupt.

There are two distinct types of cops in Cop Land, the corrupt, and the really corrupt. And they all live, drink and conspire in the same community in Garrison New Jersey, hence the title.

With so many police in Garrison a Sheriff seems redundant. Nevertheless they have Freddy (Sylvester Stallone), an amiable, doughy, deaf in one ear guy who just wants everyone to get along. Which is just the way the NYC cops like it….

Freddy rules the town with a velvet fist and is more likely to hand out a 37th warning than a ticket. A lifelong resident of Garrison, Freddy once aspired to being a ‘real’ NYC cop like the ones who that live in the town but work elsewhere, however an incident in his youth that cost him his hearing put paid to that. Worse still is the fact that Liz, the girl he saved, is now an adult and still the object of his affection, but married to one of the most especially disagreeable cops in town.

Things get a little more complicated when a late night shootout goes awry and ends with the remorseful cop panicking and leaping off a bridge. No body is found.

In the ensuing days the local Garrison bar called the 4 Aces – a known cop haunt, becomes  more animated than usual, as the standard cop bickering and teasing starts to turn a little nasty. Loudest among the squabbling voices include  Ray (Harvey Keitel), Gary (Ray Liotta), Joey (Peter Berg) and Jack (Robert Patrick), and eventually the playful banter turns nasty and ominous, with veiled threats gradually replaced with more overt ones.

Further muddying the waters is the occasional arrival of Internal Affairs investigator Moe (Robert De Niro), who has theories of his own and wonders if Freddy is in find not merely a bystander but an active participant in the illegal goings on.

Freddy meanwhile comes to learn more than he is comfortable with, and starts wondering if the blurred lines between right and wrong aren’t starting to get too blurry.

It’s a given that Cop Land is well acted, however for the most part the plot is so convoluted that guessing what is to come is irrelevant, and in the end the twists, turns and truths are essentially handed over to the audience. They aren’t that sensational either. There is enjoyment in the 4 Aces scenes where the Keitels, De Niros and Liottas get to let their acting hair down, and Stallone underplays the morose and thoughtful Freddy well, but Cop Land isn’t the all time great they made it out to be.

While I try to throw a joke or two into proceedings when I can all of the opinions presented in my reviews are genuine. I don't expect that all will agree with my thoughts at all times nor would it be any fun if you did, so don't be shy in telling me where you think I went wrong... and hopefully if you think I got it right for once. Don't be shy, half the fun is in the conversation after the movie.
View all posts by OGR →
This entry was posted in Film, Movie Reviews, Sly Stallone, Superstars, Worthwhile Movies. Bookmark the permalink.