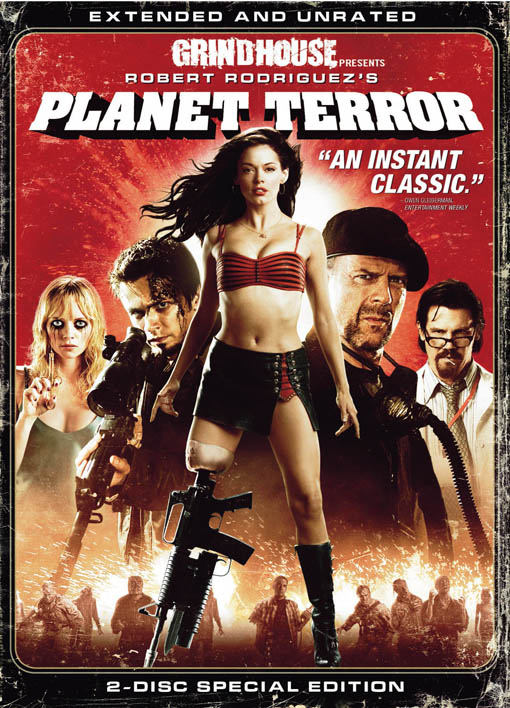 No-one was more excited than me when Tarantino and Rodriguez announced they would double-bill a pair of B movies simultaneously. Imagine my surprise and disappointment when Tarantino decided that making the film “look scratchy” and whacking a couple of old school ads would suffice.

Rodriguez in the other hand made the ultimate ode to dodgy drive-in entertainment in Planet Terror.

The plot is largely irrelevant aside from allowing Rodriguez to stage numerous set pieces and fill the screen with “oh my god did he just do that?” gore and buckets of fake blood. And because we know Rodriguez seems to have a hand in almost every step of production, editing and directing (he even does his own music!) you know he got messy making this one.

Back to the plot of sorts; Bad guys have a chemical weapon that some soldiers want… bad. The chemical is released into the air and instantly turns almost everyone in the town to mindless cannibalistic zombies. Those that are immune (and are yet to be eaten), may hold the key to a cure that might save the rest of the world, they band together and attempt to fight their way to safety. 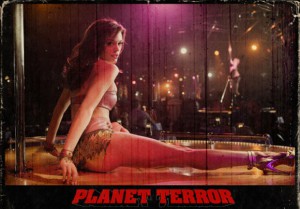 –         Fergie, destroyer of the Black Eyed Peas as a credible unit, features…

–         Josh Brolin is a prick of a husband and a Doctor, his missus is leaving him for another woman and he is none too pleased about it. 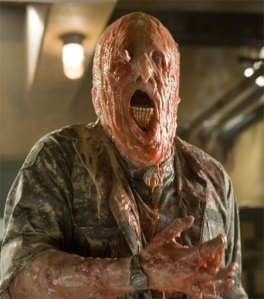 –         There is a promising sex scene that is short cut by a “reel missing” cheat by Rodriguez, who apparently hooked up with McGowan while making this.

–         Some of the worst nudity in cinematic history since Jack Nicholson and Kathy Bates shared a bath. 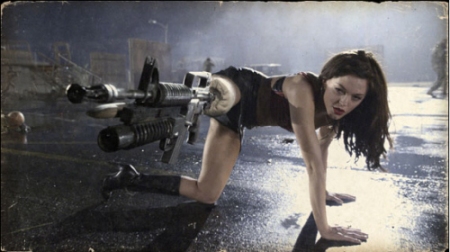 This film is basically 100+ minutes of frenzied film-making. There is always something happening onscreen even when there is not. All in all Planet Terror is a deliciously delirious blend of action, horror, black humour, gore, crazy FX and over the top shlock, mostly involving free flowing blood and pus. Only everything a grown boy needs really.

Final Rating – 8.5 / 10. B Movie perfection. I never grow tired of this film. It’s just sad Tarantino made such a momentum killer that this has never received its due.